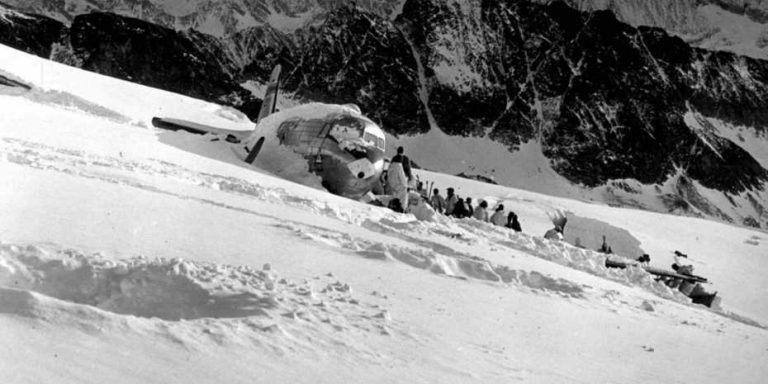 The crashed Dakota of the U.S. Air Force on November 23, 1946 on the Gauli Glacier with passengers and rescue workers. (Image: KEYSTONE / PHOTOPRESS ARCHIVE / Grunder / Schmidli, Matter)

In recent years, wreckage parts of a 1946 crashed aircraft of the U.S. Air Force were recovered at the Gauli Glacier. Model calculations by ETH Zurich researchers now show that the fuselage of the aircraft will probably only emerge from the ice in 8 to 16 years.

In November 1946, a U.S. Air Force aircraft made a veritable crash landing on the Gauli Glacier in the Bernese Oberland. The pilot of the Douglas Dakota flew on a flight from Munich to Marseille in the dense fog too deep and collided with the terrain. Since the machine remained more or less intact in this incident, all aboard survived the incident and could be rescued after a few days.

A wreck for research

The president of the Swiss Glaciological Commission, Paul Louis Mercanton, subsequently successfully campaigned for the Americans not to carry the plane out of the country. Mercanton argued that the plane would be covered by snow and gradually sink into the ice.

At some point, it would reappear, and from this, one could gain valuable conclusions about the movement of the glacier ice. An expedition of the Swiss Air Force in the spring of 1947 hid some parts of the machine. But most of the aircraft was left as wanted by Mercanton at the scene and disappeared deep in the glacier ice.

Uncertainties in the calculated ice movement

Only in recent years, the Gauli Glacier released various parts of the wreck again. For example, in the summer of 2018 a propeller, a motor block, and parts of the wings could be salvaged in a complex action. Now, of course, the question arises when the hull of the aircraft will reappear on the surface.

Researchers at ETH Zurich’s Institute of Hydraulic Engineering, Hydrology, and Glaciology (VAW) now conclude in a new study in the journal Frontiers in Earth Science that it will take a while until then.

Based on model calculations for glacier flow, they expect that the rest of the aircraft will reappear on the glacier surface between 2027 and 2035 — not where the wreckage has been found, but about one kilometer further up. Loris Compagno, who is responsible for the model calculation and has completed his master’s thesis, said:

“It is unlikely that the fuselage of the aircraft will appear where the previous parts came to light, because the glacial ice would have moved much faster in the past decades than we expect.”

Traces of the rescue operation

The researchers have a plausible explanation for the distance between the previous and the predicted reference. Guillaume Jouvet, a researcher at the VAW, explained:

“With our model, we reconstructed where the previously found parts could have been in 1947.

“The calculations show that they probably arrived there in the glacier, where the army had set up a landing strip for the recovery aircraft in 1947.”

Presumably, the parts that have appeared so far were then simply too heavy for the rather small rescue aircraft, with which one carried out such a salvage operation for the first time ever. Compagno, who became aware of the salvage operation on the basis of historical research, said:

“The engine alone was half a tonne heavy.

“That’s why you probably just left these parts at the landing strip.”

The salvage of the Dakota

For their calculations, the researchers combined different data: On the basis of previous observations, they knew approximately how powerful the glacier was in the late 1940s. And based on climate data and terrain models, they were then able to calculate how fast the glacier could have moved in recent decades. Compagno said:

“Our calculations are in good agreement with current metrics that help us understand the speed of ice movement.

“Of course, we do not know exactly how fast the glacier moved 70 years ago.”

A model for spectacular cases

The glacier model of the VAW was already successfully used to clarify a mysterious case: After on the Aletsch Glacier body parts were found by three brothers who had an accident in the 1920s, the ETH researchers could show with their model that the alpinists on the day of the accident on the way back to the hut probably got  lost. Jouvet said:

“At that time, we reconstructed a past event with our model. Now we use it as a forecasting tool.”

As a researcher, he is very curious to see if the predictions about the emergence of the Dakota will be confirmed. If the fuselage of the aircraft were to emerge from the ice sooner, Compagno and Jouvet would not fail. On the contrary:

“We would get such important information on how we could better describe the glacier flow.”

For example, the hull should appear where the first pieces of wreckage were found; this would be an indication that the Gauli Glacier in the 1950s must have moved much faster than expected. Jouvet explained:

“That would be a very insightful insight for us glacier researchers.”

Either way, it’s already clear to him.

Provided by: Fe­lix Wuer­sten, ETH Zurich [Note: Materials may be edited for content and length.]