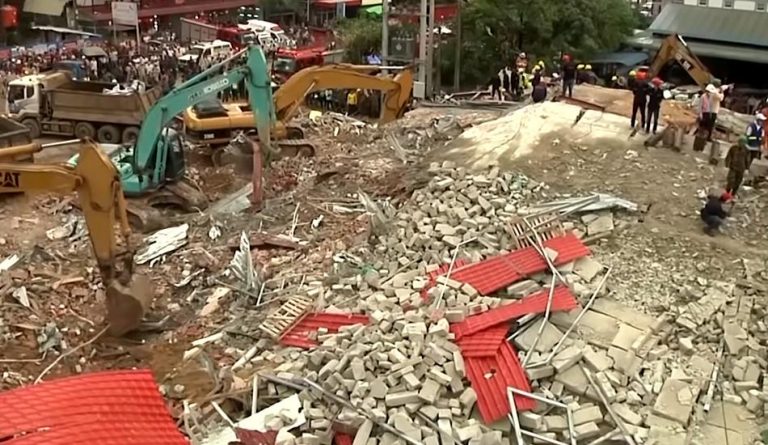 More than 25 workers were confirmed dead after the collapse of a 7-story Chinese-owned building that was under construction in Cambodia. (Image: Screenshot / YouTube)

More than 25 workers were confirmed dead after the collapse of a 7-story Chinese-owned building that was under construction in Cambodia. Prompted by the incident, the Cambodian government has called for a stricter examination of Chinese-owned construction projects.

“A moment before the building collapsed it was vibrating and then it was falling down. But it was too quick to escape,” said 31-year-old Nhor Chandeun while recovering in a hospital in the city (The Epoch Times). At the time, about 60 workers were sleeping inside the nearly finished building, since it doubled as their housing after work. Around 4 am, things started to shake, leading to the collapse of the building.

For 12 hours, Nhor and his wife were trapped deep in the rubble. They shouted for help, but to no avail — no one was there to answer their desperate calls. Both presumed that it would be the end, but fortunately, rescuers found them in time. They were among the few who survived. Khim Pov, 47, now widowed, said to NTDTV that both her husband and nephew died in the incident. She slowly lost hope while watching bodies being pulled from the ruin.

“This incident has shown the deep-rooted problems in Cambodia: corruption, lack of oversight and basic inspections of business, and an overall lack of accountability,” said deputy director of Human Rights Watch’s Asia division, Phil Robertson (Al Jazeera). The incident highlights the unregulated policies running rampant around construction projects in the city of Sihanoukville, Cambodia. The day-to-day operation on the ruined site involved workers operating without proper protective gear. They were also expected to sleep onsite instead of being given proper sleeping quarters.

Sheng Lou, Spokesman for the Ministry of Land Planning and Construction of Cambodia, confirmed that the Chinese-funded building had no construction permit. Local authorities ordered construction to be halted twice, but daily operations continued until the incident. As of now, provincial authorities have detained the Chinese project owner, Chen Kun, and construction supervisor, Deng Xing Gui, along with three other Chinese nationals, a Vietnamese, and the Cambodian who leased or sold the building site to the Chinese. An investigation into the collapse was launched immediately after the incident.

Influx of Chinese to Sihanoukville

Just recently, economic trade between China and Cambodia has seen a significant expansion. China’s state-run news agency, Xinhua, reported a 22 percent increase of trade volume between the two countries last year. In light of the growing relationship with China, Cambodian Prime Minister Hun Sen encouraged the construction of many buildings in the city. The once quiet beach town of Sihanoukville has grown into a bustling city dotted with casinos and resorts.

Zhan Jiang, a Chinese researcher, believes that the expansion of the Chinese Communist Party (CCP) has brought Tofu-dreg projects overseas. As such, locals are angered and frustrated with the subpar and dangerous results. In the aftermath of the collapse, the governor of Sihanouk Province resigned from his position with the approval of Cambodian Prime Minister Hun Sen. In addition, the deputy director of the National Disaster Management Committee, Nhim Vanda, was dismissed for lack of responsibility.