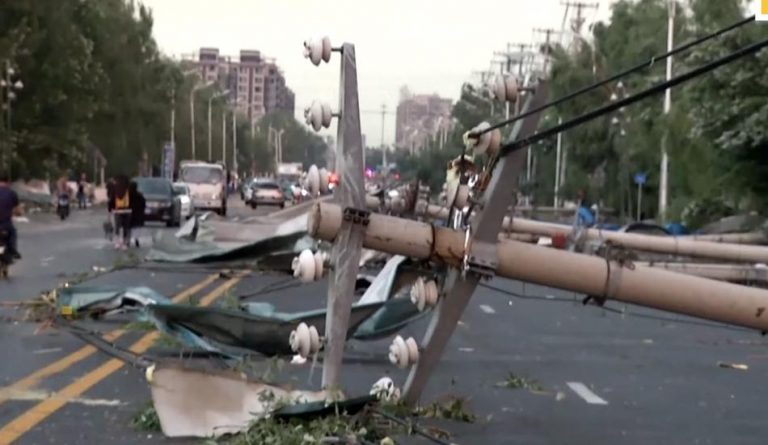 More than 190 Chinese citizens were injured and 6 were killed as the deadly tornado swept across northeastern China. According to news reports, the tornado formed 100 miles away from Beijing, in Liaoning Province, Jingouzi Township in Kaiyun, around 5 pm and traveled at a speed of 50 miles per hour. In the span of just 15 minutes, the terrifying vortex of air destroyed almost 3,600 homes, uprooted trees, wiped out factories in the city’s economic development zone, and took many lives with it.

A shocking experience in the eyes of victims

According to a high school student quoted by Red Star News: “Power went off in surrounding areas as the tornado went by. About two or three minutes later there was thunder and then it hailed.”

In one YouTube clip, debris can be seen flying around in the tornado as bystanders watch. But the might of the tornado was captured more closely in another clip: The videographer was trapped helplessly in a car as the trees swayed violently and projectiles flew in all directions around the car. The tornado left streets in a total mess. Power lines were down, car windows were smashed, the buildings turned to rubble, and bodies were found.

The township of Kaiyuan quickly responded to the crisis, sending 800 police officers, firefighters, and medical personnel to the affected area. “There are 63 people in hospital now with 15 in critical condition,” according to Yu Shuxin, director of Kaiyuan’s emergency management bureau, as quoted by Beijing Times. “Communication systems have recovered in most areas. Electricity infrastructure was severely damaged but we’ll try our best to get the power supply back up.”

The damage is now being cleaned up. However, it seems people of the area will not be getting a break any time soon as dangerous weather is expected to hit the area again. A “yellow warning” of severe convective weather, which could potentially include hail or thunderstorms, is on the move to regions around Beijing.

“It [Kaiyuan] is a flat area at the latitude of Tornado Alley of the United States,” said AccuWeather Meteorologist Jim Andrews. He explained that tornadoes in the area are neither rare nor common. He continued: “Northeast China can and does get occasional major tornadoes, although my understanding is that it falls far short of the twister density of the U.S. tornado belt.” (AccuWeather)

Each year on average, the country experiences seven to eight tornadoes, most of which hit the coastal plain in eastern China. Low-pressure systems withdrawing from central Russia and Mongolia mix with the moisture coming from the East China Sea within this narrow line. The recent tornado in Kaiyuan was mixed with supercell thunderstorms, which proved to be an atypical phenomenon of great destructive force.

Compared to the average number of twisters hitting the United States, which according to The Balance is 800 per year, tornadoes are a rarity in China. In fact, the country doesn’t even have a system in place to issue tornado warnings. Occurrences like this can only be guessed through weather reports mentioning thunderstorm warnings along with wind gusts, lightning, and heavy rains, which are color-coded in 4 tiers — the safest is blue, followed by yellow, orange, and the most severe, red.

Latest developments of the disaster: The number of rescued victims is around 210, while 1,600 citizens have evacuated the area, and approximately 10,000 people have been displaced, according to The Beijing News.