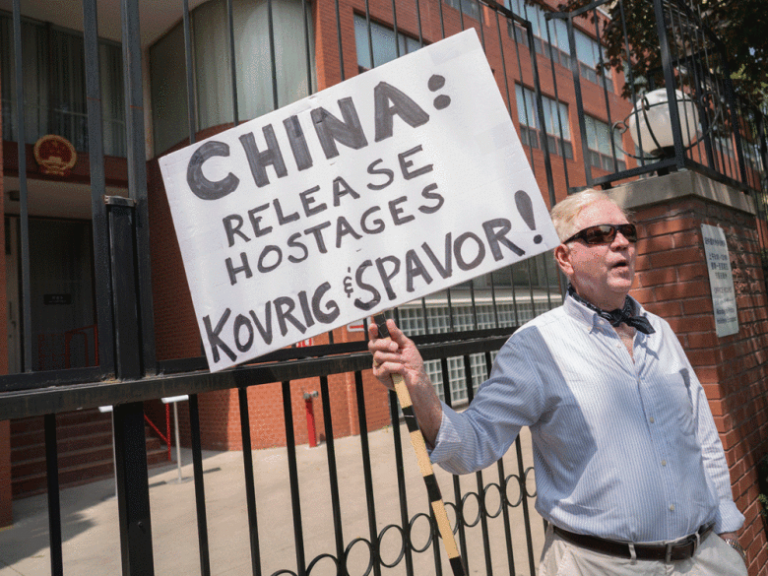 Outside the Chinese Consulate over at St. George Street in Ontario, Canada, you can expect to see an elderly gentleman with a picket sign. The 76-year-old man, a retired teacher named Lorne Hicks, is protesting against China’s detainment of two Canadian citizens, Michael Kovrig and Michael Spavor.

In December last year, China arrested Kovrig and Spavor on the accusation that they were stealing state secrets. The arrests followed Canada’s detainment of Huawei CFO Meng Wanzhou, who was charged by the U.S. for violating trade sanctions against Iran. Both Canadians have been in Chinese custody ever since and Canadian officials have only seen them about 10 times. Kovrig was apparently being held in a cell with lights switched on 24 hours a day. Though the Canadian government tried to get the men released, it soon became clear that Beijing had no intention of doing so.

Hicks has been following the story of both people since December. Last month, he found out that Kovrig has been denied reading glasses. He also read an article that stated Chinese officials were not under pressure to release the two men, since Canadians apparently “were not giving a damn.” This made Hicks determined to hold a protest outside the Chinese consulate.

“I couldn’t imagine my day without reading, and I thought of this poor guy sitting in a prison or a detention centre in China without his reading glasses… I thought there’s just something outrageous about that and inhumane… The major intent is, if somehow these two guys, Kovrig and Spavor, these two gentlemen, can be made aware that there are at least some people that are protesting, that might encourage them to feel better, realize there’s someone out there,” he said to National Post.

Hicks is aware that some might see him as an “old goat” wasting his time. However, he still plans to keep on protesting. Recently, the Chinese government arrested a third Canadian, this time on drug charges in the city of Yantai.

“I don’t think the Chinese or Canadian governments will see the arrest [in Yantai] as retaliation, but many people in both countries, and around the world, may see it that way… It’s very easy for it to be interpreted [as retaliation] from a Canadian point of view,” Shi Yinhong, an international relations professor at Renmin University in Beijing, said to South China Morning Post.

On the 30th anniversary of the Tiananmen Massacre last month, Canadian Prime Minister Justin Trudeau raised concerns about China’s horrible human rights record and asked Beijing to stop mass detainment of religious minorities in the country. “We have real concerns about China’s behavior in regards to human rights and will continue to … call for better respect of human rights on this anniversary and every day going forward,” he said in a statement (Reuters).

The citizens of Canada also seem to hold the idea of human rights very high in a bilateral relationship, according to recent surveys. In a poll conducted by Ipsos, almost 39 percent of Canadians said that a country’s human rights record is of greater importance than the economic benefits they provide. Thirty-five percent believe that the other country’s adherence to international laws must be a critical factor when determining whether Canada wants to pursue a long-term relationship with them.