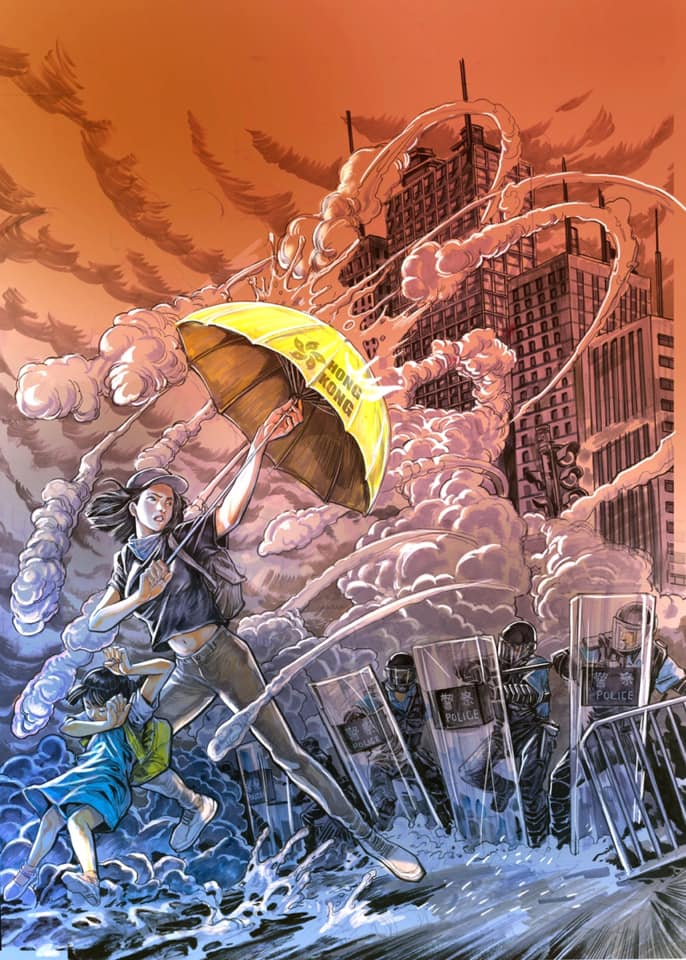 With the recent rallies taking place in Hong Kong, Daxiong felt moved to create posters as a way of showing his solidarity with those taking part in the anti-extradition protests. (Image: via Facebook)

Protesters in Hong Kong held continuing rallies on July 1 and July 7 against the country’s extradition policies. Two posters created by a cartoonist in support of the movement really resonated with those in attendance. One of the posters, which read “Hong Kong Withstand,” resonated so much that nearly every protester present was holding one during the July 7 rally. The poster generated enough buzz that it was even pictured in The Wall Street Journal and The New York Times. Who is the cartoonist generating all this buzz? His name is Guo Jingxiong, better known simply as Daxiong. Regarded as the “King Cartoonist of China,” he now resides in the United States where he keeps busy in his studio.

After obtaining a degree in Commercial Design from China Jilin College of Arts, Guo went on to found Qicartoon Studios in 1999. Then in 2006, Guo, in collaboration with Jin Yong’s animated novel Demi-Gods and Semi-Devils, took top honors at the 33rd annual Angoulême International Comics Festival in France. This marked the first time that a Chinese cartoonist won the “Anime Oscar” Award.  Guo then signed a contract with Europe’s largest comic publishing company, Soleil Productions. In 2008, he immigrated to the United States, where he started Flag Art Studios. He is one of the few Chinese cartoonists to enter the international arena, and the only Chinese cartoonist to create mainstream comics in the U.S. market. In 2010, at the 31st American ICON Festival, Guo won both the Best Readers and Special Arts Guest awards, and in 2018 he was nominated by the Academy of Canadian Cinema & Television for Best Original Interactive Production.

In a phone interview with the media on July 8, Guo said he did not expect his posters to be so popular.  He stated: “When the Hong Kong people saw my second poster, they straightaway took it to the streets. I was surprised.”

He went on to say: “The young people are constantly being defeated, but they continue to stand up and fight. Furthermore, there were one million, and another time two million people, marching peacefully. This incident touched me and became my inspiration to create the posters. I feel that, as an artist, I should express my respect for them.”

While living in China, Guo created illustrations for many well-known martial arts novelists from Hong Kong, including Jin Yong, Liang Yusheng, and Huang Yi. As a result of working with these famous novelists, he developed what is known as the martial arts spirit. This spirit holds that “if you are in trouble, I will come to help rescue you.” It is this spirit that Guo carries with him, and one of the reasons why he felt obligated to help. With so many close friends in Hong Kong and a deep connection to the people there, he felt compelled to help in the best way he knew how — through his art. He set to work creating the posters as a way of returning a little of the kindness and support given to him by the people of Hong Kong over the years. And he appears to have succeeded.

Anti-extradition protests have been going on for several months, gradually increasing in size and spreading across Hong Kong. The people of Hong Kong enjoy freedoms that those in Mainland China do not, as set forth in the constitutional principle of “one country, two systems.” For example, Hong Kong is the only city in China where people are allowed to go to the streets in protest, something we take for granted in most other countries.  Guo’s posters have inspired those taking part in the protests to continue in their determination to protect the freedom they have from CCP rule.

Even though Guo is quite famous throughout China, he personally experienced persecution for his beliefs at the hands of the Chinese Communist Party before immigrating to the United States in 2008. Hong Kong was the last city he stayed in before leaving China, but even there he didn’t feel safe from further persecution by the CCP. He is grateful to now be living in the U.S., where he can freely express his thoughts and beliefs, something he could not do in China without risking jail, or worse. He hopes that his posters will encourage the people of Hong Kong and, at the same time, help inspire the democratic movement in China.

The art Guo creates is both meticulous and full of positive energy. His cartoons are derived from traditional Chinese drawings, but also have a Western influence. Combining techniques and values from both the East and the West, his art is different from the critical and satirical cartoons of today. He believes comics come in many different forms and says that his art is created with one purpose in mind — to change the world.

Translated by Chua BC, rewrite by Tatiana Denning, D.O.