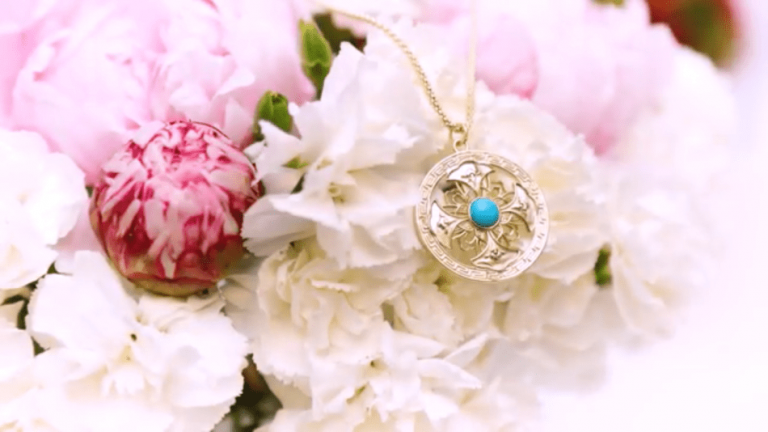 A piece from the collection of artisan jewelry at Yun Boutique in New York City. (Image: Yun Boutique / YouTube Screenshot)

Most notions about jewelry are quite superficial as jewelry is often associated with materialism and glamour. However, these notions will likely change after seeing the work of Ariel Tan, owner and founder of Yun Boutique in New York City.

Jewelry and the connection between heaven and earth

Throughout history, China was known as the Divine Land, reflecting the people’s deep belief in human-cosmic harmony. The quest of seeking a connection to the divine by the refinement of one’s character with craftsmanship is evident at Yun Boutique. According to Aerial Tan: “We continue this heritage through our practice of Falun Dafa, an ancient Chinese meditation practice.”

You can see that her work connects the past with the present, and heaven with earth. The artisans at Yun Boutique are deeply inspired by their spiritual path of self-cultivation, which is reflected in their work as each piece radiates a sense of longing to reach perfection. “We are inspired by the heaven-imparted heritage of Chinese culture, and seek to vividly recreate it in our designs. Much of our inspiration comes through our practice of Falun Dafa,” says Aerial.

Every great journey starts with a first step

In 2013, Ariel Tian founded her handmade jewelry brand and has received much attention from the fashion world. As a young jewelry brand, it has already been featured in Harper’s Bazaar, Vogue, Elle, New York Fashion Week, and Oscars gifting lounge. Still, the founder and artisans of this unique boutique are modest about their achievements. “Fame, talents, wealth, and social status are things that can be taken away at any time. I must not fail to meet the expectation heaven has for me, because I believe the most important person I must not offend is my original self, while the most important source of power I must not lose is that of heaven, with shining eyes which see through us,” says Ariel.

Exploring the connection between the human and the divine

In middle school, Ariel got in touch with a spiritual practice called Falun Gong (also called Falun Dafa). After reading the book of its teachings, Zhuan Falun, she was deeply touched. She made a promise to herself that regardless of what happened in her life, she would devote herself to the practice of self-improvement, as described in Zhuan Falun. Not long afterward in 1999, the Chinese Communist Party launched its persecution campaign against Falun Gong and its practitioners. It was dangerous to be associated with the practice during that time in China, which led Ariel to stop practicing for a year.

Starting over in the Big Apple

In 2010, Ariel Tian was accepted at the New York University Business School as an exchange student from Beijing University’s Guanghua Management School.  While on campus, she was handed a flyer about Falun Gong, which was participating in New York’s upcoming  Veterans Day parade. Upon seeing the flyer, she thought to herself: “I want to read the book [Zhuan Falun] again.” After reading the book, Ariel was deeply touched and remembered the deep faith in self-cultivation that she had experienced during her time in China.

Success is more than the sum of your achievements

Ariel accredits the inspiration for her jewelry to her exploration of the relationship between the human and the divine worlds: “The relationship between heaven and human beings is like this: Heaven asks nothing from humans — a heart returning to one’s original self is all they need.” It was during her practice that she became inspired with ideas for many of her most beautiful pieces. “In China, the earliest jewelry designs appeared in the temple to pay respect to the divine, so jewelry manifests a longing for divine nature in my understanding. Artists in ancient China purified their minds and bodies during the elevation of their artistic career. This is what I want to pursue and achieve in my work.”
Like many great artists, Ariel accredits her worldly feats to her divine experiences and by focusing upon something greater than personal achievements and everyday trifles. “If I had not practiced Falun Gong, I would not have dared to plunge into this profession, because I had no education as a designer to lean on, and no jewelry industry network. I had no support for a marketing campaign or any idea how to set up a commercial brand,” Ariel Tian said. She added: “How could I possibly succeed? Today, as a practitioner, I define success not by how big my abilities or achievements are, but by whether I am able to enlighten during the process of my creative work, and share [than enlightenment] with my audience.” With every piece of jewelry, Ariel seeks to “share my enlightenment during my journey to pursue my divine nature.”
Many are inspired by Ariel Tian’s journey and the deep connection she has to her inner-self. Listening to her and the things she values makes you rethink your own focus and what the bigger purpose of everything we do in life is. One of the many things we can learn from Aerial is the importance of gratefulness. For her, the answer is very clear: “The enlightenment I achieve through my cultivation in Falun Dafa is the source of my self-confidence and artistic inspiration. It is all I need to pave my road and artistic career. I am grateful to the Teacher who published Zhuan Falun.”

Watch the inspirational video about Yun Boutique and its creator: