Flying to Work: Uber Has Amazing Plans for 2023 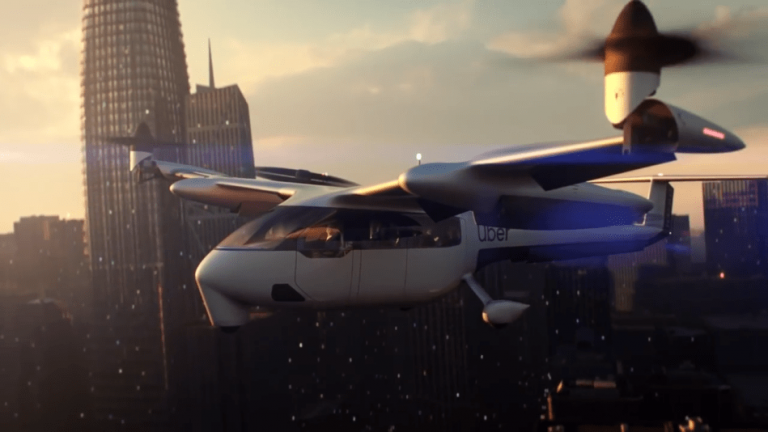 Uber has announced that it will launch a flying taxi service in Los Angeles and Dallas by 2023. (Image: Screenshot via YouTube)

No more “stuck in traffic” excuses! Uber has announced that it will launch a flying taxi service by 2023. A prototype of the vehicle that will ferry passengers across the sky at 150 mph has also been revealed. In the U.S., the service will initially be launched in two cities — Los Angeles and Dallas.

The company is already in talks with city authorities to make their launch schedule a reality. By next year, Uber aims to start test flights. The cost of traveling in a flying taxi is expected to be the same as the company’s “Uber Black” premium ride service. However, Uber is hoping that the flying taxi will end up becoming cheaper than hailing a cab as demand grows.

Uber’s proposed flying taxi will be a cross between a helicopter and a plane. It will be equipped with a rotor to help get the craft up in the air, after which the wings will provide the lift. “There are four passenger seats, arranged two-by-two. Behind the second row is space for storing luggage. Aside from some electric blue lighting and similarly colored seat belts, that’s about it. There aren’t the same kinds of creature comforts you’d find on an airplane, but that’s likely by design since Uber is planning to only use these aircraft for short rides,” according to The Verge.

The taxi is being designed in partnership with Safran Cabin. Uber wants the interior design to be the industry standard for electric vertical take-off and landing (eVTOL) vehicles. The company has already announced an aerial rideshare program in which people can hire helicopters to New York’s John F. Kennedy Airport. The copters will eventually be replaced by the eVTOL vehicles once government approval comes in. Outside of the U.S., Australia will be the first country in the world to get a taste of Uber’s flying taxis in 2023.

“Australian governments have adopted a forward-looking approach to ridesharing and future transport technology… This, coupled with Melbourne’s unique demographic and geospatial factors, and culture of innovation and technology, makes Melbourne the perfect third launch city for Uber Air. We will see other Australian cities following soon after,” Susan Anderson, Uber’s manager for the region that includes Australia, said in a statement (The Telegraph).

Given that Uber has a history of aggressively entering a market, strict regulations are required to avoid negative consequences of flying taxis. The company’s car ride service faced severe restrictions from cities across the world after traditional taxi operators complained of unfair pricing and loss of employment. Jake Whitehead, a University of Queensland researcher who specializes in transport, believes that governments need to proactively work with flying taxi companies to craft laws that will enable a smooth transition into this new transportation network.

Munich-based startup Lilium has developed the world’s first electric-powered flying taxi. The company will soon start trials in several cities and plans to start operations by 2025, two years after Uber’s scheduled flying taxi service. The jet hits a top speed of 180 mph, almost four times faster than a road taxi. Combined with the absence of traffic issues, this would mean faster travel between two locations.

Lilium aims to create a vast network of landing pads across cities. The energy-efficient design of the jet will give the company a massive advantage when it comes to pricing. The jet apparently uses less than 10 percent of its maximum horsepower when cruising, which is similar to the energy consumed by an electric car. This means that Lilium will be in a position to fix the fares of its flying taxis at the same level as road taxis.