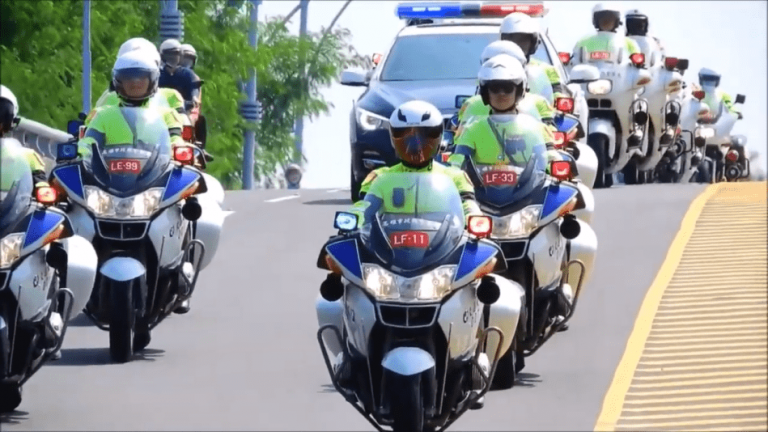 Zhang Yongxiang, after graduating from the Taiwan Police Academy, was assigned to the Neihu District Police Station in Taipei. In July 1999, when news of the large-scale suppression of Falun Gong by the Chinese Communist Party (CCP) reached Taiwan, the Taipei City Police Department instructed police officers of local police stations to investigate Falun Gong activities in Taiwan. At that time, there were only tens of thousands of people practicing Falun Gong in Taiwan. Coincidentally, a police lieutenant and his wife in the Neihu district were Falun Gong practitioners. When Zhang inquired about Falun Gong, the couple patiently explained and provided information about Falun Gong.

Zhang had a few unhealthy habits at the time. He smoked and drank while watching the video tapes. Interestingly, when Zhang was watching a lecture about the negative effects of smoking, he suddenly found the taste of smoking unpleasant. He extinguished the cigarette and lit a new one from another pack hoping that it would taste better, but strangely, it tasted even worse than the last one. He extinguished the cigarette and rewound the tape back to the lecture about smoking. Upon reviewing it, Zhang understood the negative and addicting effects of smoking and drinking on a person’s mental and physical health. Falun Gong practitioners are advised to quit smoking and drinking. Right then and there, he was able to stop smoking, something that had been a habit of his for 20 years previously. Furthermore, he had been a heavy drinker. He could drink six bottles of beer at any one time, and this drinking problem affected his work. Soon after he took up the practice of Falun Gong, he also quit drinking. He followed the teachings of Falun Gong and began to take the initiative to do a better job at work.

As a policeman, Zhang had many duties. One of them was to deal with the public from all walks of life. The stress of the job had caused him back aches along with neck and shoulder pain. Less than two months after he began practicing Falun Gong, Zhang felt physically and mentally relaxed. He lived a life following Falun Gong’s tenets of Truthfulness, Compassion, and Forbearance. He maintained a peaceful and kind heart, as well as a considerate attitude toward others. Whenever there was a conflict, he reflected on himself rather than pointing fingers at others, thus mitigating many conflicts.

For example, before he took up the practice, whenever he issued tickets for traffic violations, he often had clashes with the violators. When both parties became emotional, conflicts escalated, and he received many complaints for his poor attitude as a result. After practicing Falun Gong, Zhang followed its principles by maintaining a kind and peaceful attitude toward others. No matter how unpleasant the violators were, Zhang remained calm.

Zhang said: “If you change your perspective, you will not feel angry or have negative thoughts. I told the violators that when they broke the laws, it would have adverse effects on them and others as well, and could even cost lives. That was the reason why I must implement the laws and issue the tickets.” With such a calm attitude and sound rationale, he was able to get the job done without causing complaints.

Zhang believes that Falun Gong’s principles of Truthfulness, Compassion, and Forbearance are eternal universal values. Two decades have passed since the CCP began its persecution of Falun Gong in 1999. Many people around the world, like Zhang, have taken up the Falun Gong practice after learning about its principles and teachings. Like other practitioners around the world, Zhang works hard to clarify the truth to people who were misguided and deceived by the propaganda of the CCP. He holds banners and distributes information in public places, such as sightseeing locations, bus stations, piers, airports, subway stations, and in front of Chinese consulates. Along with others, he calls upon the world to pay attention to the CCP’s cruel persecution of Falun Gong, encourages Mainland Chinese people to withdraw from the CCP, and awakens people’s conscience to stop the persecution in China.