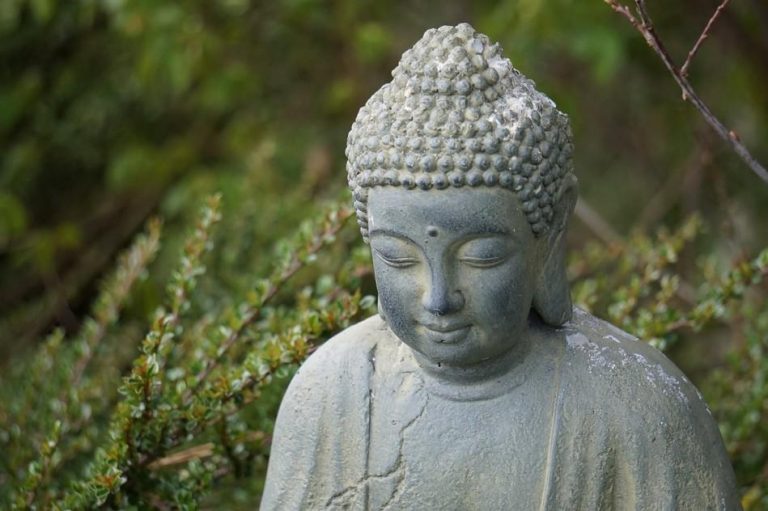 "You gouged out and stole the eyes from many statues of divine beings so you could make a bigger profit."(Image: via pixabay / CC0 1.0)

The circle of deeds: a long time ago, in ancient India, there was a Persian king in the country of Shakya. One day, the king came to the residence of Buddha. After dismounting from his carriage, he immediately removed his headgear, sword, and shoes, and solemnly clasped his hands and walked straight to Buddha to pay homage.

The king fell to his knees and prostrated himself on the floor at Buddha’s feet. For this visit, the king himself prepared a vegetarian meal and personally ushered Buddha and the entourage of monks to the main street of the capital. When Buddha was seated, the king personally poured water for Buddha to wash his hands. After the meal was over, Buddha delivered his dharma for the king and his subjects. Countless people listened quietly to Buddha’s teachings. While Buddha was delivering his dharma, the atmosphere was solemn and grand.

At that time, there were two merchants who also had the honor of seeing Buddha. One of the merchants said: “Buddha is like an emperor. His disciples are like loyal ministers. Buddha delivers the dharma and his disciples disseminate the teachings. The king is virtuous and respects Buddha’s nobility. This is why the king willingly serves Buddha.” This merchant felt joyous and willingly followed Buddha’s teachings.

The other merchant’s thoughts were entirely different. He said: “This king is really stupid! He is the king, with all the power and wealth, what else does he want? Buddha is like a big cow and his disciples are like a carriage. A cow drags the carriage in all directions — north, south, east, and west. Buddha is not worthy of being worshiped.”

The day after, the two merchants left the country of Shakya and walked for 30 miles. Both felt tired, so they stopped at a pavilion by the roadside to rest and drink wine.

The merchant with good thoughts was immersed in the teachings of Buddha and felt the blessings of the gods.

The other merchant who spoke ill of Buddha had disrespectful thoughts that invited evil spirits and ghosts. He became so drunk that his body became numb and he had no sense or feelings. He fell out of the pavilion, rolled onto the road and slept as though dead. Early the next morning, a carriage passed by and ran over the merchant, killing him.

When the kind-hearted merchant woke up, he found his friend dead. He became worried that when he returned to their hometown, people would think that he killed his friend in a dispute over money. He quickly left for another country. It so happened that the king of that country had just passed away and had no son to inherit the throne.

This country had a scroll of prophecy and it was recorded that a humble person would become king of the country. The king who had just passed away had a divine horse. The prophecy stated that when the horse saw the person who was to become the new king, it would kneel before him.

The ministers prepared a grand carriage for the divine horse to travel around the country to find the future king. Tens of thousands of people lined the street to watch the divine horse.

When the kind-hearted merchant came to the country, he heard the news and thought that it was unusual. He walked to the main street. When the divine horse saw the merchant, it went straight to him, knelt down, and licked his feet. The ministers understood that the man in front of them was the new king to rule the country.

The merchant who ascended the throne pondered deeply: “Why was I destined to become the king? I must have listened to Buddha’s teachings and received the grace of Buddha.” He immediately led the ministers to sincerely pay homage facing the direction of the country of Shakya where the Buddha resided. He then led a group of ministers to visit Buddha to seek enlightenment on why he became the king.

The compassionate Buddha told him: “When the king of Shakya paid homage to Buddha with the vegetarian meal, deep inside your heart, you said that ‘Buddha is like an emperor and Buddha’s disciples are like loyal ministers.’ This is the good seed you planted and today you are harvesting the good fruit. The other merchant said that ‘Buddha is like a cow and Buddha’s disciples are like a carriage.’ This is the bad seed that man planted. Whatever you sow is what you reap. This is cause and effect. Blessings are due to good causes and evils arise from evil deeds. Everything is caused by one’s own self.”