Night Sky Petunias: Find a Universe Inside a Flower 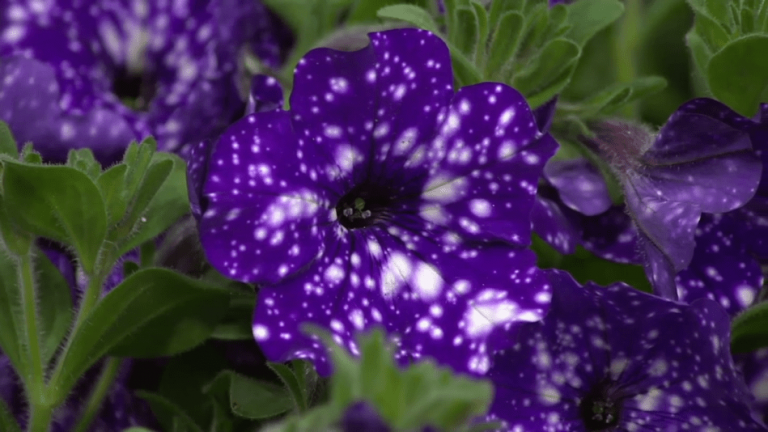 Holding a Night Sky Petunia gives you the feeling of having the universe in the palm of your hand. (Image: Screenshot / YouTube)

Ever wondered what the universe would look like in the palm of your hands? Grab a Night Sky Petunia and you’ll know exactly how that feels. One of the most beautiful flowers in the world, the colors and patterns on these petunias are guaranteed to mesmerize.

The look of this hybrid petunia is rather unique. The flowers have a deep purple color with clusters of white spots on the surface. At first look, they might remind you of a starry sky. In fact, this is one of the reasons why the flower is named “Night Sky.” They are also known as “Galaxy Flowers.”

The white patterns on the flowers are caused by the variations between day and night temperatures. To maintain their dramatic look, they need to be kept at around 100°F during the day and 50°F during nighttime.

The plants can reach a height of up to 16 inches and usually bloom during the spring and summer. Native to South America, the petunia was introduced into Europe in the 19th century, where it soon became famous as people fell in love with the exquisite look it gave their gardens. Night Sky Petunias bear a close similarity with potato, tomato, and tobacco plants.

Being trailing flowers, Night Sky Petunias are perfect for windowsill containers or hanging pots. The Night Sky is just one of the 35 species of petunia flowers in the world. Their primary colors tend to be purple, pink, yellow, white, and red.

In order to ensure that Night Sky Petunias grow perfectly, it is necessary for them to be propagated in a medium with a pH of 5.5 to 5.8. Until roots become visible, the soil temperature has to be maintained between 68° and 72°F. Once the roots are seen, start fertilization with 75 to 100 ppm N (parts per million of nitrogen). As the roots start to develop, fertilization can be increased up to 200 ppm N.

At this point, it is recommended that night temperatures of 50°-60°F and day temperatures of 57°-75°F be maintained. “The more the temperature changes from hot to cold, the more “starry” your petunias will get. If you want more white speckles, you’ll need colder temps. Having your flowers in too hot of temperatures, however, will make them much more purple than white,” according to House Beautiful.

Another factor that influences the color pattern of the flowers is wilting caused by drought. Under such situations, the white coloration in the flowers increases. Night Sky Petunias grow best in conditions where light with intensities of 50,000 to 80,000 lux exists. If the light is too low, it can cause the stems to stretch and decrease the quality of the plant. Night Sky Petunias should not be excessively watered since this can lead to diseases as well as growth issues.

High pH is bad for Night Sky Petunias. The youngest leaves often tend to exhibit signs of interveinal yellowing. However, waiting until the leaves show yellowing is obviously a bad choice since the process is irreversible and you will be stuck with defective plants. A good way to avoid the problem is to conduct soil pH tests regularly.