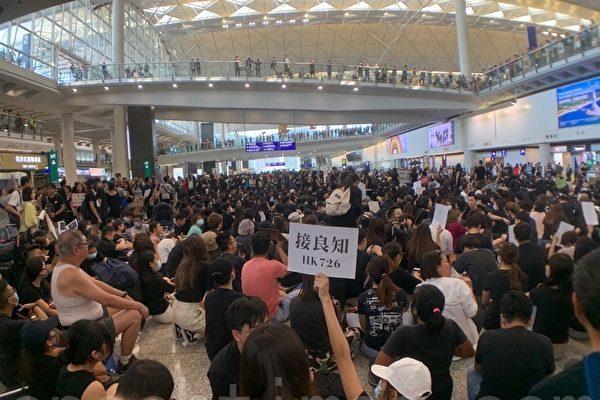 On July 21, 430,000 Hong Kong people joined an anti-extradition protest in Hong Kong. At about 9 p.m., a mob of approximately 800 men wearing white shirts gathered around the Yuen Long subway station. They had wooden sticks and iron rods as rudimentary weapons and used them to strike out at passers-by, including returning anti-extradition protesters, who were easily identified by their black clothing, as well as media reporters. The rabble forced their way into the station to beat people indiscriminately and witnesses reported hearing many screams and shouts of pain echoing within the station.

Videos on YouTube showed that the violent attack lasted for a few hours. Victims fled crying and screaming, and the platform was covered in blood from the attacks. At least 45 people were injured, including a pregnant woman and reporters. Some people were hit over the head and received head wounds that bled profusely. Among the injured, one was in critical condition and five were in serious condition.

The police took their time and arrived at the scene when the attack was well advanced, which drew a lot of criticism from the public. Having arrived at the station, the police did not immediately act to resolve matters, but instead stood by, watching the mob conduct their vicious acts and made no effort to arrest any of the perpetrators. Hong Kong observers could see that the attack was condoned by the police and suspected that it was indirectly orchestrated by them too. Under mounting public pressure, the police were forced to act, but only arrested 11 suspects.

Two senior police personnel told Reuters that some of the attackers were members of the Triad and included Wo Shing Wo, the gang with the longest history in Hong Kong, along with members of the gang known as 14K.

According to the Associated Press, it typically requires a middle-man to broker a deal with the Triad so that the identity of the appointer remains anonymous. Lynette Ong, Associate Professor of Political Science at the University of Toronto, commented that no matter who the appointer was, attacks targeting protesters clearly showed that the goal was to intimidate them and stop others from taking part in demonstrations in the future.

According to the Hong Kong police, the Triad is involved in such illegal activities as extortion, drug trafficking, gambling, and prostitution. It is not as high profile as it used to be some 40-50 years ago, but remains active in some areas.

Thai boxer Athit Rueanphet admitted to reporters that he was paid to attack the pro-democracy protesters along with the Triad gang members as use of fists as weapons is not against the law for pro fighters. Fighters often act as bodyguards or do security work to make extra money, and some accept work from the underworld as paid thugs.

On July 22, the Democratic Party in Hong Kong made an announcement strongly condemning the Hong Kong government for “letting the Triad spill blood on Yuen Long.” The Hong Kong Confederation of Trade Unions claimed that July 21 was the darkest day in Hong Kong’s history because of the blatant collusion between the police and the Triad.

The Yuen Long attack reflects the rotten state of Hong Kong under China’s manipulation as well as the sham of the “one country two systems” promise. What happened in this city is against world values and the rule of law jeopardizing the legal rights of the people and putting their lives at risk.