Thugs in Uniform: Hong Kong Police Will Never Be the Same 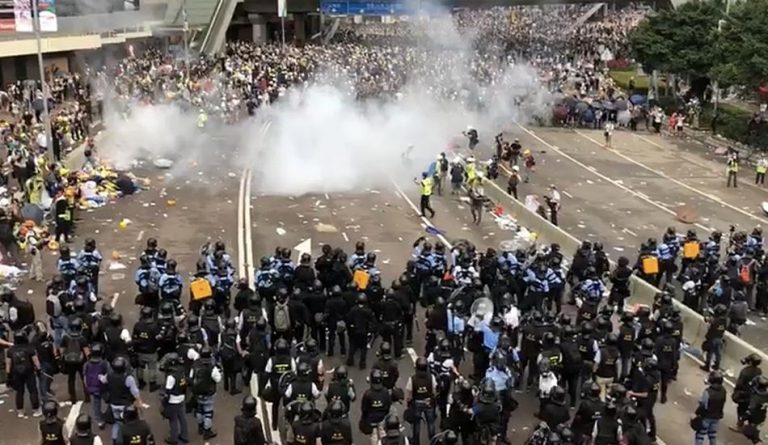 The president also warned that if something like the Tiananmen massacre were to repeat in Hong Kong, the U.S. political climate would become so negative against Beijing that a trade deal would be an impossibility. (Image: wikimedia / CC0 1.0)

Hong Kong police are facing intense criticism after they charged into peaceful demonstrators and beat them up. Protestors claim that the police were no different from the thugs who had attacked them a few days earlier.

On July 21, numerous men in gas masks stormed a mass transit station in Yuen Long. They started attacking the passengers, many of whom were demonstrators who were returning home after participating in the protest against the Hong Kong government. The masked triad gangs even attacked a woman holding a child and a pregnant woman, showing no mercy to either. Forty-five people were hospitalized in the attack, with one person severely injured.

The incident sparked concerns that the attackers may not have acted independently and that they might actually have been hired by the local government to teach the protestors a lesson. “The participants were not all triad members… Some were just ordinary villagers, some were paid to do a job… All the crime committed by triads is for money… We call this extralegal governance — sometimes when governments cannot use the formal law enforcement for whatever reason, they pay for it. This is the normal way to do business,” Wing Lo, expert in triad societies at City University of Hong Kong, said to CNN.

A few days back, a similar violent incident took place against the demonstrators, once again at the Yuen Long mass transit station. But this time, it was carried out by the police. A special tactic unit rushed into the station, pepper sprayed protestors, and started beating them up with batons. Some of the people tried to fight back, but couldn’t stop the attack.

After the incident, several people shared photos of the incident and compared it to the one instigated by triad gangs a week earlier. Many people accused the police of acting just like the thugs and causing harm to the public without any concern or restraint. Some activists feel that the more aggressive nature of the police is a sign of things to come, and that Hong Kong might end up becoming a repressive police state just like mainland China.

“It is very likely they are going to abolish the freedom of assembly. So we are asking people to come out because it may be the last time that we are going to have a peaceful and lawful protest in Hong Kong… I’m sure that people are exhausted. It’s already been two months since the first protest … but I guess people are not going to give up or rest until we legitimately have freedom and democracy… It will be a long way to go but everyone in Hong Kong will do what it takes,” an organizer of the protests said in a statement (The Guardian).

Following the attack on demonstrators, the police went ahead and arrested 44 people on riot charges, accusing them of breaking fences, setting up roadblocks, attacking police officers, and damaging street signs.

When protestors found out that some of their people were being detained, they gathered outside the police station and started chanting “Reclaim Hong Kong.” The police came out and unleashed a new wave of violence. One of the law enforcers even pointed a large gun at them. After the attack, only a few demonstrators remained around the station.

The 44 people arrested on charges of rioting could face up to 10 years in prison if convicted. The arrested protestors will be on trial at the Eastern Magistrate’s Court. The police have warned of further arrests and indicated that several people are under scrutiny for “disrupting social order.”