Exotic Cuisines: Cambodia and Its Love of Fried Spiders 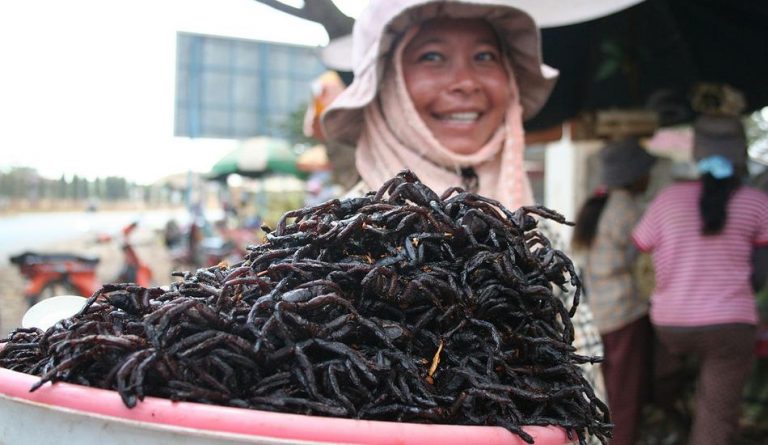 Tarantulas are favorite snacks in Cambodia. (Image: via Wikimedia Commons)

In some “normie” countries, people eat chips for snacks. But in Cambodia, they are fond of something more exotic — fried spiders, tarantulas in particular. Not for watching them grow as pets, which is itself concerning, but for consumption.

Fried spiders as a delicacy

Hairy tarantulas are fried with spices and sold by street vendors. Some offer the spiders grilled and dipped in sauce. The taste of fried tarantulas can be somewhat difficult to explain. The abdomen of the spider usually tastes bitter since all the organs inside are still intact. The eggs often taste pretty good. The legs would remind one of the tempuras, while the rest of the flesh has a strong spicy taste.

For most Cambodians, fried tarantulas are essentially a national delicacy. Many falsely believe that these spiders are “clean,” as they subsist on plants and herbs. However, the truth is that tarantulas live by eating insects. Eating fried spiders is traditionally considered as a good way to deal with respiratory issues, heart problems, back pain, and so on. Women believe that eating tarantulas will make them beautiful.

Farming tarantulas is big business in Cambodia. “Farmers might find spiders, then one guy collects them and brings them to me or sends them through the bus or something, sometimes I go and get them, it really depends on the situation… They use the farming tool like a knife and push the tool into the fangs… If they don’t know how to do this, they just use nail clippers to cut off the fangs,” a local tarantula wholesaler said to ABC News.

Fried tarantulas are a hit with tourists. Though many choose not to eat the fried spiders, sellers have found various ways to monetize growing tourist interest. They often charge a fee for allowing tourists to click photos of the fried tarantulas. Some vendors make money by allowing visitors to film the food preparation process.

The huge local demand for tarantulas has created a supply issue in the business. Since 1990, Cambodia has lost about 20 percent of its forest cover, which is making it difficult for farmers to find enough tarantulas to satisfy demand. The excessive harvesting of spiders is driving them to near extinction in some regions.

Large areas of forests are being cleared for timber and rubber plantations, which also reduces the population. “The next generations may not know about them because these beasts have become so rare, not like before… As more people clear [forests] to plant cashew nut trees, they will be gone,” a Cambodian vendor said in a statement (News18).

Though the tradition of eating tarantulas in Cambodia might have started in the late 19th century, it became popular in the 1970s. At that time, the communist Khmer Rouge was violently persecuting anyone suspected of being against their violent ideology. Nearly 3 million people (almost a quarter of the population) were killed. Cambodian society descended into starvation. As a consequence, citizens started to look for cheap food sources.

They found that tarantula spiders act as an excellent supplementary dish. For one, the spiders were plentiful and easily catchable. The tarantulas were rich in nutrients like zinc, protein, and folic acid. Fried spiders quickly became a staple among most Cambodians of that time, as the spiders provided them with the nutrition that sustained their bodies. Since then, the culture of eating tarantulas has been ingrained in Cambodian society.

Would you take a bite into a tarantula, if given a chance?