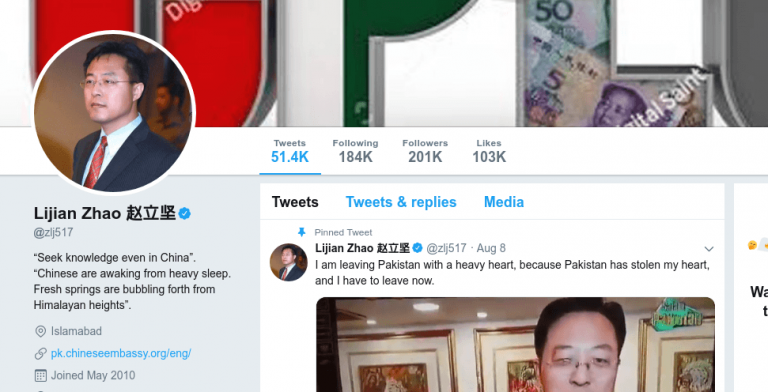 Zhao Lijian, the deputy chief of mission for the Chinese embassy in Pakistan, said in a tweet that black families in the U.S. tend to bring down real estate prices because their entry into a neighborhood forces out affluent white families. (Image: via Twitter)

With China’s repressive policies against the Uyghur minorities in Xinjiang getting labeled as state-sanctioned racism, Zhao Lijian, the deputy chief of mission for the Chinese embassy in Pakistan, wanted to counter this through his Twitter account. But instead of providing proof that Beijing is not torturing the Uyghurs, Zhao tried to justify the Chinese government’s actions by drawing parallels to America’s racial relations, triggering a racial controversy online.

In a tweet, Zhao argued that black families in the U.S. tend to bring down real estate prices because their entry into a neighborhood forces out affluent white families. The tweet attracted intense condemnation by Susan Rice, a former U.S. National Security Advisor. “You are a racist disgrace. And shockingly ignorant too. In normal times, you would be PNGed for this. Ambassador Cui, I expect better of you and your team. Please do the right thing and send him home,” Rice replied in a tweet.

As his statements started becoming controversial, Zhao deleted the tweet. However, instead of offering an apology, Zhao started intensifying his attacks on American society, saying that the living conditions of African-Americans in the U.S. were worrisome, that American women were living in fear of sexual assault, and that the entire country itself was gripped with fear of school shootings.

Zhao is among the crop of Chinese officials who are trying to use social media to influence foreign opinions about China. Almost all Chinese embassies across the world operate Facebook pages. However, these are largely used to spread (dis)information about Chinese culture. In contrast, Twitter accounts of Chinese officials tend to be personal statements about politics and society. But the officials seem to be overly aggressive in defending Beijing’s actions, thereby ending up having the opposite effect, and strengthening the criticism against China’s authoritarian regime.

For instance, Cui Tiankai, the Chinese ambassador to the U.S., recently tweeted that Taiwan is a part of China and warned that “those who play with fire only get themselves burned.” The tweet was made following Taiwanese president Tsai Ing-wen’s visit to the U.S. Another Chinese official, Zhang Lizhong, called the Maldives Parliament speaker Mohamed Nasheed’s criticism of China’s debt-trap policy as “misleading” on Twitter, warning that such a statement “harms our friendly relations.”

Some political experts believe that Chinese officials do not have the proper communication training to be active on Twitter. “It’s a gamble… While the authorities may want the diplomats to speak out to have a greater say on English social media, it would be very risky, especially according to Chinese diplomatic traditions… Nothing in foreign policy is too small, and what if they say something incorrect? Or what if the policymakers in Beijing change their minds?” Zhan Jiang, a former professor of journalism at Beijing’s Foreign Studies University, said to South China Morning Post.

Twitter previously triggered a China-related controversy after it mass-suspended accounts critical of Beijing. The accounts were suspended just a few days before the 30th anniversary of the Tiananmen Square massacre on June 4.

The move attracted widespread condemnation, with U.S. Senator Marco Rubio accusing the company of colluding with the Chinese government. “@twitter has apparently suspended a large number accounts that are critical of  #China including accounts of people outside of China. Twitter has become a Chinese govt censor,” he said in a tweet.

Twitter eventually apologized for their actions, saying that the account suspensions were an error. However, many refused to buy the company’s explanation and accused Twitter of covering up their pro-Chinese government agenda. Twitter is only used by government officials and other public personalities or organizations in China. The general public is unable to access the platform due to Internet censorship.