Meet the Miao: A Chinese Ethnicity With an Unusual Love for Silver 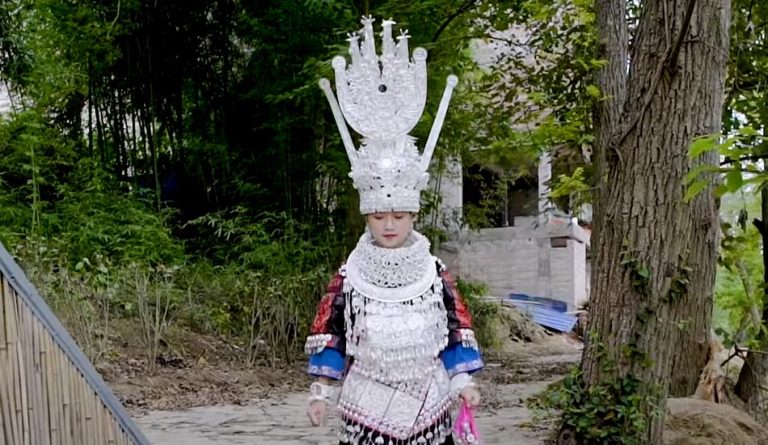 In South China, there lives a tribe called the Miao. Recognized by the state as one of the 55 minority groups in the country, the Miao are famous for a unique characteristic — their love of silver. The women of the tribe often sport exquisite silver accessories.

For the Miao, silver represents a symbol of wealth and status. If the jewelry looks exquisite, the wearer is appreciated more. A complete set of Miao silver jewelry can weigh several kilograms. Yet, the women wear it with great cheer, as it gives them an identity in the tribe. For over four centuries, Miao women have been covering themselves head to toe with silver.

“For females from the Miao ethnic group in the mountainous Guizhou province of south-eastern China, wearing heavy and elaborate silver headdresses and jewelry is common during weddings, funerals and the annual Sister’s Meal Festival, a springtime celebration when couples publicly profess their love. Many families believe their daughters cannot get married if they don’t own a proper silver outfit, and start saving up to 10 years before the ceremony,” according to the BBC.

The Miao have their own craftsmen who create each piece of jewelry with great care. The items are handmade, using the knowledge passed down from generations. In some Miao villages, almost all the men are trained from childhood to craft silver items. It usually takes a few months to complete a silver head-piece. In recent times, there has been a large-scale migration of youngsters from Miao villages to cities in search of a better lifestyle. As such, the silverwork tradition of the Miao is in decline.

Enthusiastic community members still continue with their traditional roles, selling their finished jewelry in nearby villages. “I think it’s important to keep and pass on the culture of minority groups. Because of globalization, we are exposed to new ideas, and we pay less attention to the cultures of minority groups. Gradually, they fade away. When I wear silver accessories from my mother, I feel happy, and I’m glad she prepared them for me,” a Miao woman said to the Great Big Story.

According to Miao legends, their ancestors lived somewhere to the east of Beijing. After losing a war against the Huaxia tribe, they migrated to the south and southwest. The Miao take great care of the way they present themselves. In addition to silver, the women wear clothes that give off a strong cultural message. The patterns can range from a historic legend to an ancient totem. Due to this, historians often call the dresses “wearable history books.”

Popular among the Miao is the Lusheng Festival. “All the Miao people come together from different villages. The girls dress up in their best traditional costumes and silver headdresses, while the boys carry their lusheng (a musical instrument) and head to the Lusheng Stadium to celebrate the festival. They circle in rings as the girls dance to the rhythm of the music provided by the boys. The ceremony is performed to bring hope for a favorable harvest in the coming year alongside good health. It is also a chance for the youth to express their admiration and love towards one another,” according to China Highlights.

Sister’s Meal Festival is another beloved celebration. Usually celebrated from the 16th to the 18th of the third month in the lunar calendar, it is similar to Valentine’s Day. The women hide an item inside steamed rice, wrap it in a handkerchief, and give it to the men. Different items convey different things to the receiver. If the man finds cotton and Chinese parsley inside the rice, it means that the woman wants to marry him as soon as possible. But if the man receives pepper or garlic, it means that they’re not interested and want the person to stay away.