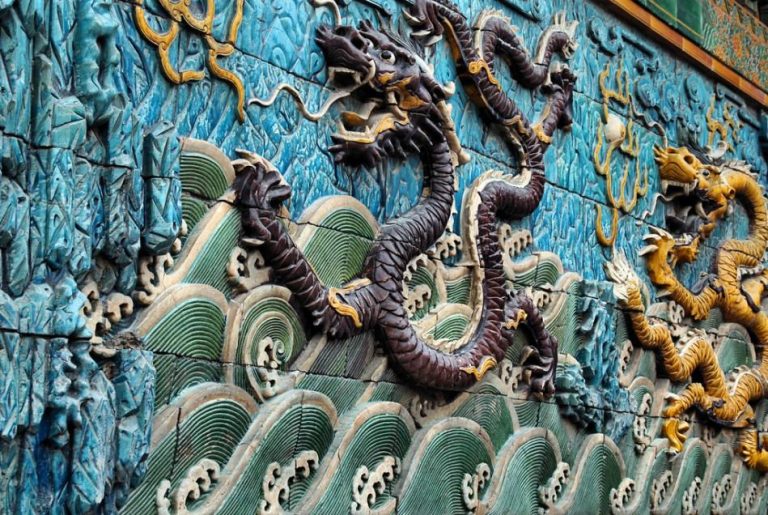 The dragon, seen as a symbol of power, is an important creature in Chinese mythology. (Image: Mal B via flickr CC BY-ND 2.0)

Dragons are an important creature in Chinese mythology. It is seen as a symbol of power and is often used as an embellishment in paintings and sculptures. Several Chinese festivals also incorporate dragon masks or puppets in their celebrations.

Physiologically, there is a difference between the Western and Chinese concepts of dragons. In the West, dragons are huge lizard-like creatures with bat-like wings and long tails. “Chinese dragons have serpentine bodies, four legs, and are usually without wings. They are said to be a composite of various other animals — the body of a snake, the antlers of a deer, the talons of an eagle, the soles of a tiger, the scales of a carp, and the eyes of a demon. It is said that Chinese dragons have 117 scales,” according to Draconika.

The idea of the dragon having attributes of other animals possibly comes from the legend of the Yellow Emperor. The emperor is believed to have launched a series of wars against nine tribes living in the Yellow River valley. He incorporated the animal totems of all these tribes into his own dragon totem, thereby creating a symbolic dragon with features of nine other creatures.

In the West, dragons are feared and portrayed as evil creatures that bring destruction. Those who kill dragons are traditionally portrayed as heroes. Though there are accounts of destructive dragons in Chinese mythology, the culture typically depicts them as grand, magical beasts that are kind and benevolent. Many Chinese temples have sculptures of dragons present in the compounds.

“Chinese dragons are given many powers in Chinese folklore. They are said to control thunder, floods, and rain. Unlike the western Chinese dragon, rumored to be evil and dangerous, the Chinese dragon is said to be kind and noble. He symbolizes divinity, goodness, excellence, power, and energy. Chinese dragons are also very smart. They are not to be afraid of, but are mainly considered as protectors that keep people from harm. Chinese dragons typically live in heaven or in worshiped places,” according to Ninchanese.

According to traditional Chinese mythology, there are nine types of dragons, usually believed to be the nine sons of an ancient Chinese dragon king. They are said to have different looks and powers.

Bixi is a turtle-shaped dragon with sharp teeth. Bixi is the eldest among the nine and is said to be so huge and strong that he can carry heavy objects with ease. This dragon is usually portrayed in graves and old temples.

Bi’an almost looks like a tiger and is often seen in front of jails and courtrooms, as it is considered the dragon of justice.

Chiwen is a sea dragon with a harsh voice. It is often depicted as a hybrid of a dragon and fish. Chiwen apparently swallows evil spirits and keeps them away from humans.

Pulao is considered to be dog-like in that it utters a huge scream to warn people of an oncoming disaster. As a consequence, it is often embellished on the handles of bells.

Qiuniu is believed to be a cross between a dragon and a cow. Often depicted with yellow scales, it loves music. Many of the traditional musical instruments used to be adorned with images of Qiuniu.

Taotie is seen as a mix of a wolf and dragon, and is often seen embellished in bronze vessels.

Suanni is a dragon with the features of a lion. It is associated with wisdom and is typically seen in Buddhist temples.

Yazi has a dragon body with the head of a leopard. It likes to get in battles and is considered the god of war.

The final dragon is Baxia, which is portrayed as half dragon and half snake. Baxia is revered as the god of water.