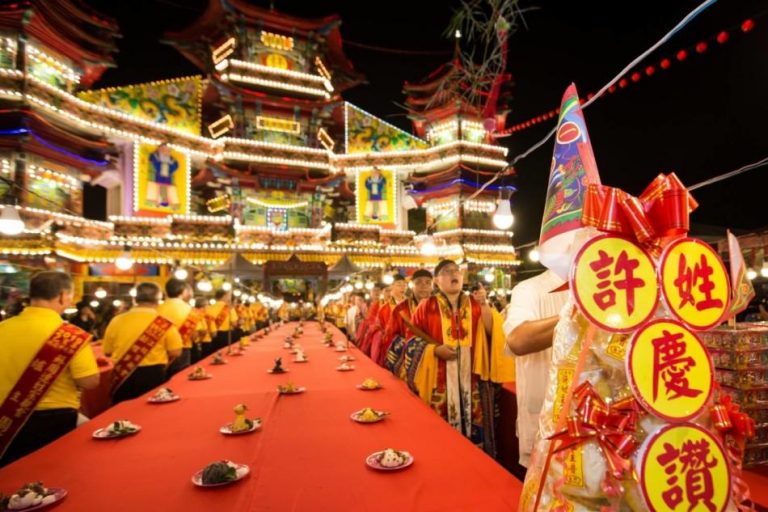 The Keelung Ghost Festival is designated as one of the 12 major festivals by Taiwan Tourism Bureau. (Image: Keelung City Government)

Designated as one of the 12 major festivals by the Taiwan Tourism Bureau, and the first-ever registered intangible cultural heritage of Taiwan, the Keelung Ghost Festival has been observed annually since 1856.

This fascinating festival is to commemorate the bitter clashes between rival clans in Keelung that led to around 100 deaths in 1851. It also marks the ethnic harmony and sympathy for those suffering hard times.

With the themes of “legacy and harmony (傳承與融合),” the 2019 Keelung Ghost Festival was organized by the Keelung City Hsu Family Association (許姓宗親會). Marking the 165th anniversary of the Keelung Ghost Festival, the festive celebrations culminated in a grand parade and the release of water lanterns from evening until midnight on the 14th day of the lunar month, which fell on August 14 this year.

The opening ceremony of the parade was held at the Keelung Maritime Plaza in front of the Keelung Train Station, in which Taiwanese President Tsai was invited to give opening remarks. In addition, President Tsai, accompanied by Keelung City Mayor Lin Yu-chang, also joined the group from the hosting Hsu Family Association to lead the procession.

Participated in by 15 clan associations, as well as various public and civic organizations in Keelung City, the procession was comprised of dozens of colorful floats with water lanterns and a variety of traditional folk performances that stretched for about 2 kilometers.

In addition to the wonderful performances provided by various clan associations and civic groups, the Tian Guo Marching Band (天國樂團) and Waist Drum Team (腰鼓隊), along with an eye-catching float from the Taiwan Falun Dafa Association (台灣法輪大法學會), were among the most outstanding groups.

Comprising 120 and 80 local Falun Gong practitioners respectively, they are the largest groups in the parade. The large sizes, coupled with their majestic performances, made them one of the most popular groups in the procession.

It has become the norm of life in Keelung to sit on the two sides of streets along the procession route after dinner to observe this important annual rendezvous and enjoy the festive atmosphere in the middle of the summer every year.

Right after the parade, the water lanterns prepared by all clan associations were transported to the seashore and released into the water.  The burning lanterns drifting off into the darkness signifies giving directions to the wandering ghosts and spirits of their ancestors.