The Most Memorable Moments Amid the Hong Kong Protests 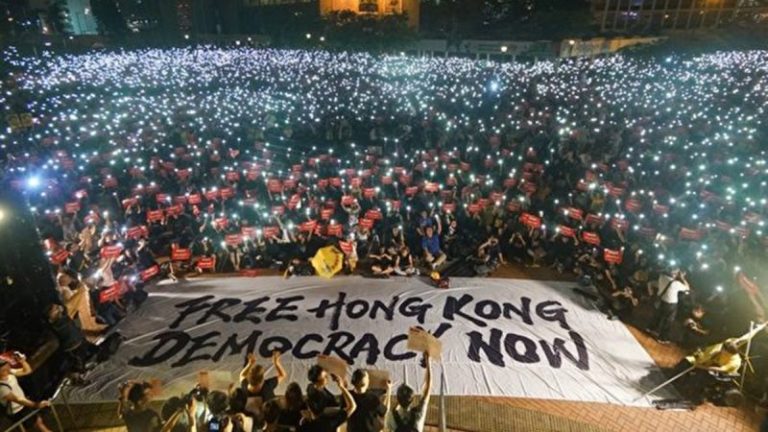 A Hong Kong canlelight vigil for democracy. (Image: via The Epoch Times)

Two months have passed since the first anti-extradition Hong Kong protests on June 9. For 10  consecutive weeks, waves of protests have swept across the city, creating countless memorable moments and demonstrating the courage, resilience, and tenacity of the people.

Moment 1: History made with millions of hearts

On June 9, more than 1 million Hongkongers took to the streets to join the “anti-extradition march.” The unprecedented scale rocked the world and even U.S. President Trump expressed his surprise.

Seven days later, a record-breaking 2 million Hongkongers took part in a protest, showing the world their unwavering determination to reject the amendments to the Fugitive Offenders Ordinance.

Hong Kong has a population of 7.4 million, which means that over one-quarter of the people participated in the demonstration. Why are so many Hong Kong people protesting?

Fundamentally, the protests reflect the tenacity and courage of Hong Kong people in defending their homeland to protect the universal values of freedom, democracy, human rights, and rule of law, while resisting the Chinese Communist Party (CCP)’s destruction of human dignity.

During the protests, many Hong Kong citizens defended the young demonstrators and stood up to the police.

A mother who bravely stood in front of the armed police trying to convince them to cease fire and stop attacking protesters even prayed to God to help the police. A video clip of this moment touched the hearts of viewers both at home and abroad.

These moments demonstrated Hongkonger’s solidarity, conscience, compassion, and respect for life and for each other, which are values rejected by the Chinese communist regime and by the Hong Kong government.

Week after week of protests to fight for Hong Kong’s freedom and democracy by its young demonstrators touched the hearts of its senior citizens. The concerns over the police’s violent crackdown and arrest of young people motivated thousands of senior citizens in their 70s and 80s to declare their support for the protesters and urge the police to cease their excessive use of force.

Historically, Hong Kong’s elderly people have rarely participated in social movements, marches, or protests, but thousands of them held rallies to support the young people and condemn police brutality. The young people’s courage and sacrifices have united people of all ages toward their common goals.

Historically, Hong Kong people have been reputed to be cold and indifferent, but recent events have completely changed such a perception. Hongkongers are demonstrating with their actions that they are warmhearted and they care for each other.

Young Hongkongers risking their lives for Hong Kong’s future — their enthusiasm and courage has moved the older generations and inspired them to protect and speak up for the young people, as well as to express their love for their homeland.

Hongkonger’s conscience, compassion, and cross-generational support created one of the most memorable moments in the anti-extradition protest.

Moment 4: A friend in need is a friend indeed

Another of the most memorable moments during the protests that touched the hearts of millions around the world, regardless of nationality or ethnicity, came from the rationality, non-violence, and kindness demonstrated by the Hong Kong protesters. A prime example is when an ambulance divided the human sea.

On the day of the demonstration on June 16, when an ambulance carrying protesters who had fainted was trying to rush them to the hospital, the jam-packed crowds parted like the Red Sea for the ambulance and clapped their hands to cheer on their fellow demonstrators inside the ambulance. The world praised the rationality, self-discipline, and kindness of the protesters.

Many demonstrators exhausted their savings to purchase helmets, facemasks, protective gear, and supplies in order to protect their fellow demonstrators and help rescue those who got attacked and injured by the police.

“Hong Kong has become a battlefield, but humanity and compassion shone through the rain of bullets.”

Amid unprecedented trials and tribulations, Hongkongers have shown their sincerity and humanity. They put the safety of others before their own with their selflessness, compassion, and thoughtfulness.

Hongkongers’ actions presented to the world that the power of kindness has the ability to touch hearts far and wide, while at the same time creating a stark contrast to the atrocities and violations of humanity by the CCP and the Hong Kong government.

On July 16, Time magazine published its “25 Most Influential People on the Internet in 2019” and Hong Kong’s anti-extradition protesters were listed among them.

The selection of the anti-extradition protesters by Time magazine highlights three significant points:

First, the unwavering tenacity of the people and their peaceful and rational approach have attracted the attention and acknowledgment of the international community.

Second, the unity of Hong Kong’s young people for a common ideal has exhibited the spirit of Hong Kong’s millennials who successfully coordinated, collaborated, and executed the demonstrations without central leadership.

Third, the Internet has enabled people with new tools to take the initiative, collaborate, and communicate with each other to fight against a totalitarian system.