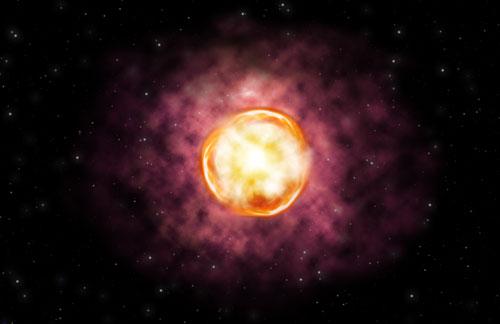 A renegade star exploding in a distant galaxy has forced astronomers to set aside decades of research and focus on a new breed of supernova that can utterly annihilate its parent star — leaving no remnant behind. The signature event, something astronomers had never witnessed before, may represent the way in which the most supermassive stars in the Universe, including the first stars, die.

Three years of intensive follow-up observations with a variety of telescopes, including the Gemini North telescope and its Multi-Object Spectrograph on Maunakea in Hawai’i, the CfA | Harvard & Smithsonian’s MMT Observatory located at the Fred Lawrence Whipple Observatory in Amado, AZ, and the Magellan Telescopes at the Las Campanas Observatory in Chile, provided crucial perspectives on the object’s distance and composition.

Edo Berger, of the Harvard-Smithsonian Center for Astrophysics and a member of the investigation’s team, said:

“The Gemini data provided a deeper look at the supernova than any of our other observations.

“This allowed us to study SN 2016iet more than 800 days after its discovery, when it had dimmed to one-hundredth of its peak brightness.”

“These remarkable Gemini observations demonstrate the importance of studying the ever-changing Universe. Searching the skies for sudden explosive events, quickly observing them, and, just as importantly, being able to monitor them over days, weeks, months, and sometimes even years is critical to getting the whole picture.

“In just a few years, NSF’s Large Synoptic Survey Telescope will uncover thousands of these events, and Gemini is well positioned to do the crucial follow-up work.”

In this case, this deep look revealed only weak hydrogen emission at the location of the supernova, evidence that the progenitor star of SN 2016iet lived in an isolated region with very little star formation. This is an unusual environment for such a massive star. Berger added:

“Despite looking for decades at thousands of supernovae, this one looks different than anything we have ever seen before. We sometimes see supernovae that are unusual in one respect, but otherwise are normal; this one is unique in every possible way.”

SN 2016iet has a multitude of oddities, including its incredibly long duration, large energy, unusual chemical fingerprints, and environment poor in heavier elements — for which no obvious analogs exist in the astronomical literature.

Sebastian Gomez, also of the Center for Astrophysics and lead author of the investigation, which was published in The Astrophysical Journal, said:

“When we first realized how thoroughly unusual SN 2016iet is, my reaction was: ‘Whoa — did something go horribly wrong with our data?’”

The unusual nature of SN 2016iet, as revealed by Gemini and other data, suggest that it began its life as a star with about 200 times the mass of our Sun — making it one of the most massive and powerful single star explosions ever observed. Growing evidence suggests the first stars born in the Universe may have been just as massive.

Astronomers predicted that if such behemoths retain their mass throughout their brief life (a few million years), they will die as pair-instability supernovae, which gets its name from matter-antimatter pairs formed in the explosion.

Most massive stars end their lives in an explosive event that spews matter rich in heavy metals into space, while their core collapses into a neutron star or black hole. But pair-instability supernovae are a different breed.

The collapsing core produces copious gamma-ray radiation, leading to a runaway production of particle and antiparticle pairs that eventually trigger a catastrophic thermonuclear explosion that annihilates the entire star, including the core.

Models of pair-instability supernovae predict they will occur in environments poor in metals (astronomer’s term for elements heavier than hydrogen and helium), such as dwarf galaxies and the early Universe — and the team’s investigation found just that.

The event occurred at a distance of 1 billion light-years in a previously uncatalogued dwarf galaxy poor in metals. Gomez said:

“This is the first supernova in which the mass and metal content of the exploding star are in the range predicted by theoretical models.”

Another surprising feature is SN 2016iet’s stark location. Most massive stars are born in dense clusters of stars, but SN 2016iet formed in isolation some 54,000 light-years away from the center of its dwarf host galaxy. Gomez added:

“How such a massive star can form in complete isolation is still a mystery. In our local cosmic neighborhood, we only know of a few stars that approach the mass of the star that exploded in SN 2016iet, but all of those live in massive clusters with thousands of other stars.”

To explain the event’s long duration and slow brightness evolution, the team advances the idea that the progenitor star ejected matter into its surrounding environment at a rate of about three times the mass of the Sun per year for a decade before the star blew itself into oblivion.

“Most supernovae fade away and become invisible against the glare of their host galaxies within a few months. But because SN 2016iet is so bright and so isolated we can study its evolution for years to come.”

“The idea of pair-instability supernovae has been around for decades. But finally having the first observational example that puts a dying star in the right regime of mass, with the right behavior, and in a metal-poor dwarf galaxy is an incredible step forward.”

Not long ago, it was not known if such supermassive stars could actually exist. The discovery and follow-up observations of SN 2016iet have provided clear evidence for their existence and potential for affecting the development of the early Universe. Gomez said:

“Gemini’s role in this amazing discovery is significant, as it helps us to better understand how the early Universe developed after its ‘dark ages’ — when no star formation occurred — to form the splendor of the Universe we see today.”