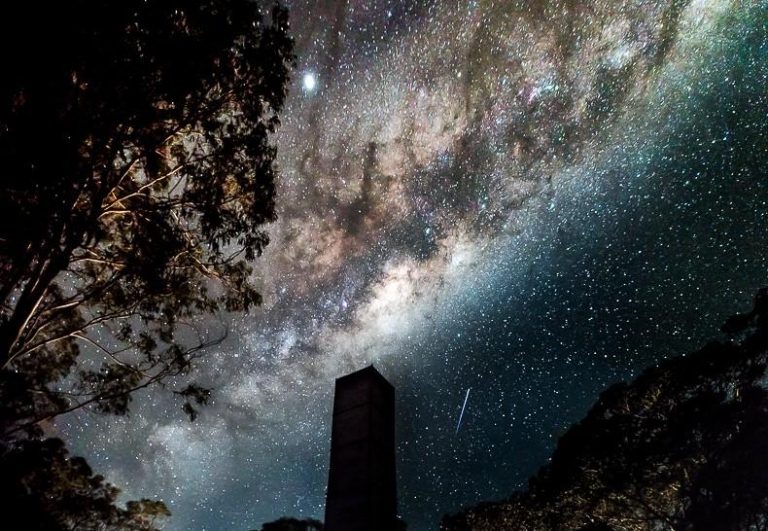 Even though the black hole at the center of the Milky Way is a monster, it’s still rather quiet. (Image: via Troy Oakes Photography )

Even though the black hole at the center of the Milky Way is a monster, it’s still rather quiet. Called Sagittarius A*, it’s about 4.6 million times more massive than our Sun. Usually, it’s a brooding behemoth. But scientists observing Sgr. A* with the Keck Telescope just watched as its brightness bloomed to over 75 times normal for a few hours.

The flaring is not visible in optical light. It’s all happening in the near-infrared, the portion of the infrared spectrum closest to optical light. Astronomers have been watching Sgr. A* for 20 years, and though the black hole does have some variability in its output, this 75 times normal flaring event is like nothing astronomers have observed before.

This peak was over twice as bright as the previous peak flux level. These results are being reported in the Astrophysical Journal Letters in a paper titled “Unprecedented variability of Sgr A* in NIR.”

Here's a timelapse of images over 2.5 hr from May from @keckobservatory of the supermassive black hole Sgr A*. The black hole is always variable, but this was the brightest we've seen in the infrared so far. It was probably even brighter before we started observing that night! pic.twitter.com/MwXioZ7twV

In an interview with ScienceAlert, Do said:

“The black hole was so bright I at first mistook it for the star S0-2, because I had never seen Sgr A* that bright. Over the next few frames, though, it was clear the source was variable and had to be the black hole.

“I knew almost right away there was probably something interesting going on with the black hole.”

At this point, astronomers aren’t certain what caused the flaring. Sgr. A* has exhibited flaring before, just not as brightly. So flaring itself isn’t unprecedented.

It’s likely that something has disrupted Sgr. A*’s usually quiet neighborhood, and there are at least a couple of possibilities. The first is not actually a disruption, but an inaccuracy in the statistical models used to understand the black hole.

If that’s the case, then the model needs to be updated to include these variations as “normal” for Sgr. A*. The second possibility is where things get interesting — something has changed in the black hole’s neighborhood.

The previously-mentioned star named SO-2 is a prime candidate. It’s one of two stars that approach very close to Sgr. A* in an elliptical orbit. Every 16 years it’s at its closest. Back in the middle of 2018 was its last closest approach, when it was only 17 light-hours away from the black hole.

It’s possible that SO-2’s close approach disrupted the way that material flows into Sgr. A*. That would generate the kind of variability and bright flaring that astronomers saw in May, about one year after the star’s close approach.

But astronomers aren’t certain. SO-2 is not a very large star, and it seems unlikely that it could cause this type of disruption. Not only that, but it’s the largest of the S stars that get close to Sgr. A*, so it’s unlikely that one of the other stars could be the cause, either.

Back in 2002, astronomers saw what they thought might be a hydrogen gas cloud approaching the center of Sgr. A*. By 2012, astronomers were more certain that it was a cloud, and it was named G2. They measured the temperature of the cloud at 10,000 degrees Kelvin, and they were able to measure its trajectory: In 2013, it would travel close enough to the black hole that the tidal forces would tear it apart.

Initially, astronomers thought that gas from G2 might be drawn into Sgr. A*’s accretion disk, and that it would flare brightly as it was heated. But that never happened.

In the final analysis (if there ever is one in science), this flaring may just be the natural result of a variable flow of material into Sgr. A*, which is expected to be lumpy. If that’s the case, then we’re back to just updating the statistical model used to explain the black hole’s variability.

The only way to know is to gather more data. Not only with the Keck, while the galactic center is still visible at night, but with other telescopes. During the last few months, the galactic center has been visible, and telescopes like the Spitzer, Chandra, Swift, and ALMA have been watching. These observations across multiple wavelengths should help clarify the situation when they’re made available.

Provided by: Evan Gough, Universe Today [Note: Materials may be edited for content and length.]