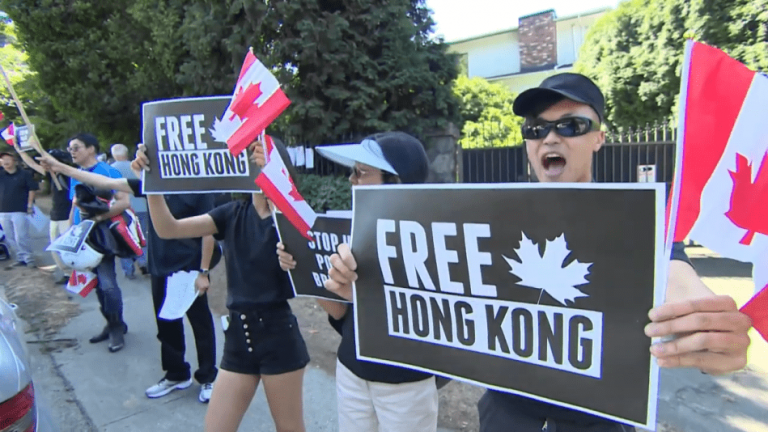 The situation in Hong Kong remains turbulent. Some Hong Kong groups based in Canada hope that the Canadian government can do more to support the Hong Kong people in their struggle for freedom and human rights by protecting Hong Kong’s democracy activists through actions such as freezing the assets of those who violate Hong Kong’s freedom.

According to Radio Free Asia, groups, such as the Vancouver Federation, the Canada-Hong Kong Link, and the Hong Kong Association for Advancement, are actively promoting the “Help Hong Kong” campaign. They are appealing for the Canadian Foreign Ministry to issue a statement that the Canadian government is paying close attention to the Chinese government’s violation of its commitment to the “one country, two systems” promise and interfering with the right of Hong Kong people to govern Hong Kong.

Further appeals are being made, asking that the Canadian government apply sanctions to those who abuse Hong Kong’s freedom and rights by freezing their assets or those of their families in Canada. Finally, to prevent the possible future Extradition Bill from harming the rights of Hong Kong Canadians, they are asking the Canadian government to prepare a strategic response as soon as possible.

Gloria Fung, Chairman of Canada-Hong Kong Link, said that there are more than 1 million Canadians who regularly spend part of each year living in Hong Kong, and for this reason, the Canadian government should pay great attention to the crisis in Hong Kong. She wants the Ministry of Foreign Affairs to issue a statement as soon as possible to show their concern about the situation in Hong Kong and for them to issue a Hong Kong travel warning as well as to sanction those in power who have violated democracy and human rights in Hong Kong.

Gloria Fung said: “We should have an effective way to limit people from entering Canada who have violated the freedom of human rights, democracy, and the rule of law. We should also be able to limit their assets and those of their families in Canada.”

Kenneth Tung, who participated in lobbying the U.S. Congress, said that compared with the United States, Canada’s foreign policy toward Hong Kong is relatively passive. Now, the situation has changed and Hong Kong’s human rights have been under great pressure, so Canada should take the initiative and propose such a law.

Chak Kwong Au, a Councillor from Richmond City, British Columbia, said that Hong Kong immigrants have been deeply involved in mainstream Canadian society and share Canadian values. Most of the Canadian Chinese veterans who participated in World War II came from families of Hong Kong immigrants. Canadians also recognize and pay attention to what is happening in Hong Kong.

Chak Kwong Au said: “The entire world is looking at Hong Kong. My Western friends and my colleagues in the parliament are asking what is happening in Hong Kong making the actions taken by the Hong Kong government of international significance.”