Fascinating Nature: Into the World of Chinese Moon Moths 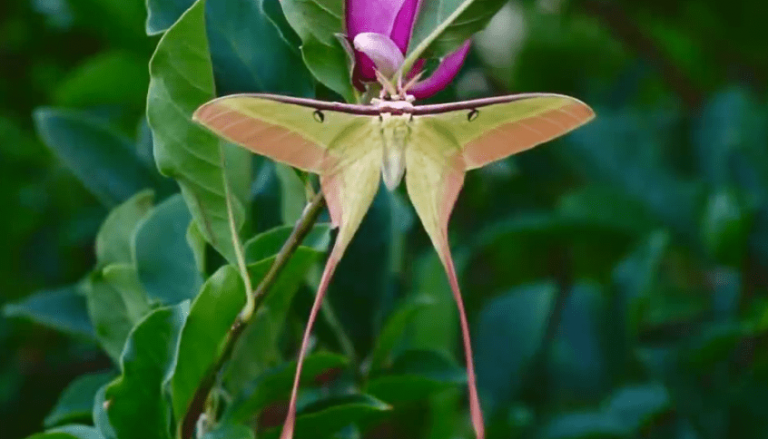 Chinese moon moths are sexually dimorphic. The males have longer tails and are usually yellow or neon-pink in color. In contrast, the female moths are plumper than the males. These moths are generally found in deep mountainous forests of China, where the climate is humid and cool.

The natural host plant of Chinese moon moths is an Asian pine tree. Female moths can lay up to 120 eggs. The caterpillars tend to look dark green and are often decorated in white dots and stripes. The sides have metallic golden patches. They take about one and a half months to transform from egg to cocoon. Caterpillars usually hatch after 10 to 14 days. However, this can speed up if the humidity is higher. Within five weeks or up to a few months, an emergence will happen depending on the humidity and temperature.

As an adult, Chinese moon moths have a rather short life, living a maximum of 10 to 12 days. Males live shorter than females as the latter have more fat reserves. Males of the species tend to be the most frantic among all moon months. “When stressed or otherwise disturbed they may go wild and start flapping their wings hysterically and ram themselves into objects. They may also drop themselves on the floor. This behavior is the cause of their short-lived beauty: most specimens will be completely worn out and torn after three days,” according to Breeding Butterflies.

For breeders, the Chinese moon moth is one of the more difficult species to raise in captivity. Newcomers are well-advised to steer clear from attempting to raise them. Only those who have extensive experience in raising other moth species should try their hand at raising Chinese moon moths.

The U.S. has a moth species as well — the American moon moth. Also known as a Luna moth, these insects typically have broad pale green wings that span about 3 to 4.5 inches and carry transparent eyespots on them. They are often seen around deciduous woodlands. They can be found in regions like eastern North Dakota, eastern Texas, south to central Florida, and so on.

“Adults are very strong fliers and are attracted to lights. Mating takes place after midnight, and egg-laying begins that evening. Females lay eggs in small groups or singly on both surfaces of host plant leaves. The eggs hatch in about one week and the caterpillars are sedentary and solitary feeders. Leaves and silk are used to spin papery brown cocoons in litter under the host plant,” according to Butterflies and Moths.

When threatened by predators, the caterpillar’s mouth will regurgitate smelly liquids in a move to keep attackers at bay. The females can lay anywhere from 200 to 600 eggs. Luna moths are known to wrap cocoons in leaves in order to keep vulnerable larvae safe from outside threats during metamorphosis. Once they emerge from the cocoon, Luna moths only live for about a week. The interesting thing is that they don’t have any mouthparts to feed since their only purpose is to reproduce.