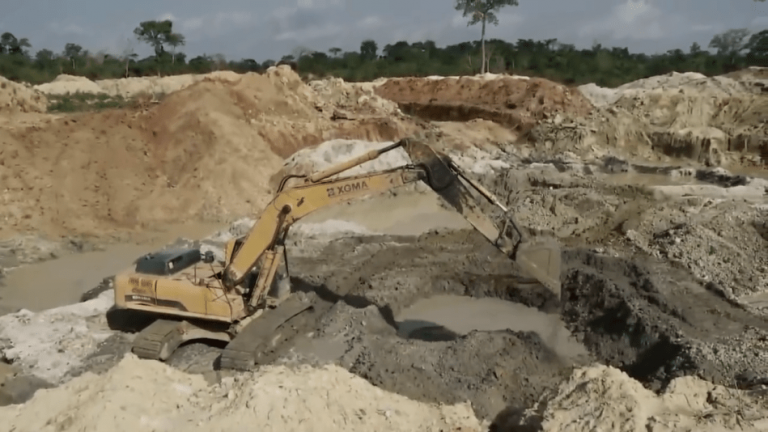 For China, African countries are storehouses of resources that need to be extracted to meet the demands of the growing Chinese population. (Image: Screenshot / YouTube)

For China, African countries are storehouses of resources that need to be extracted to meet the demands of the growing Chinese population. In Sierra Leone, a Chinese company established gold mining operations in the town of Masumbiri, with locals hoping that it would usher prosperity into the region. However, not only are their dreams left unfulfilled, economic conditions are said to have become even worse for the people.

Dayu, a company that began operating in Masumbiri last year, had promised jobs for the locals. Young people lined up at the company office and were soon bringing in a regular salary to their homes. The town, with a population of just about 5,000 people, got water pumps and even cell phone service for the first time thanks to the company. Initially, it seemed like the company would solve all the economic hardships of the town.

But almost one and a half years since the mining began, people started to realize that things were not improving. The money they received as monthly salaries did not make up for the acres of land they had to give up. To make matters worse, poverty was worsening instead of declining. As to why this was happening, there is an interesting explanation.

Before Dayu set up shop in the town, the place used to attract numerous outsiders who wanted to hunt for gold. While some would get lucky and find something substantial, others would simply be left empty-handed despite decent efforts. Those who did find gold used to spend their earnings in the town.

Once Dayu started operations, it hired about 350 locals. However, the company also pushed out individual miners. Dayu pays a worker about US$50 to US$150 per month. But some locals used to earn more money servicing the individual miners. Though the locals employed at Dayu enjoy a steady salary, their monthly income actually declined when compared to their previous situations.

There is also the problem of illegal mining. Last year, Sierra Leone deported 38 Chinese people for this reason. “The Chinese are accused of involvement in illicit mining causing environmental degradation and child labour,” a police spokesman said in a statement (South China Morning Post). The miners were apparently forcing employees, which also included kids, to work in inhumane conditions.

China’s investment in Sierra Leone has been a much-debated topic. While some of the natives see it as an infusion of capital, others see it as a fruitless relationship that does not produce any significant benefit to the people of the country. Julius Maada Bio, the current president of Sierra Leone, has called the Chinese infrastructure projects a sham. After he came into power last year, Bio’s administration canceled a contract to build a US$318 million airport in the capital of Freetown.

“After serious consideration and diligence, it is the Government’s view that [it] is uneconomical to proceed with the construction of the new airport when the existing one is grossly underutilized,” a letter from the country’s Minister of Transport and Aviation to the project’s director stated (CNN).

One of the poorest nations in Africa, the International Monetary Fund ranks Sierra Leone as facing a moderate risk of debt distress. When the previous president was in power between 2007 and 2018, the country took on US$224 million in debt from China, out of which US$161 million was taken in 2016 alone.