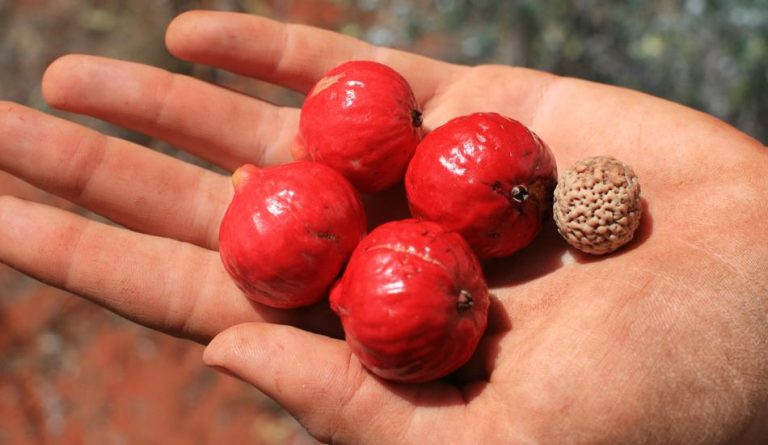 The fruit of Quandong was used as a substitute for meat. (Image: JennyKS via wikimedia CC BY-SA 3.0)

Quandong is a fruit that has been used for thousands of years by aboriginal Australian tribes. Members of the Pitjabtjara Tribe used to eat the fruit before venturing out for hunting trips. While the fruit was seen as an excellent substitute for meat, its bark and leaves were largely used for medicinal and ceremonial purposes.

The wonders of Quandong

Quandongs contain almost twice the amount of Vitamin C compared to an orange. They also provide iron, zinc, magnesium, Vitamin E folate, and calcium. The fruit is rich in phenolic-based antioxidants that are known to protect against medical conditions like Alzheimer’s, cancer, and cardiovascular diseases. The rutin in the fruit not only reduces the proliferation of free radicals, but also works with Vitamin C to minimize dark circles under the eyes, as well as reduce the effects of aging on the skin. Quandong kernels contain oils that have anti-inflammatory and antibacterial properties.

Australian tribes were particularly interested in the medicinal uses of the fruit. “Specialised uses of the Quandong included a form of tea which was drunk as a purgative. Quandong tree roots were also ground down and used as an infusion for the treatment of rheumatism. Typically Quandong leaves were crushed and mixed with saliva to produce a topical ointment for skin sores and boils. Encased within each Quandong seed is an oil-rich kernel which was also processed in a similar fashion to treat skin disorders,” according to Nullarbor Net.

Quandongs are typically found in the arid and semi-arid regions of Australia. The trees can grow up to 3 meters in height. A fully matured Quandong tree can produce anywhere up to 25 kg of fruit. However, 40 percent of the weight is kernels. The fruits have a short ripening season that starts in August and ends sometime around September to October. Increased rainfall can stretch the season up to three to four weeks. The fruit is largely obtained through the wild harvesting of plants that grow in a land that is maintained in its natural state.

Picking Quandong fruits requires certain expertise. “You need to know when to pick it because if you go too early, the fruit is a little on the sour side… If you want to promote the product, you want it to be nice and ripe. When you press the fruit, there is a stone inside, and if you feel that bit of movement between the stone and the fruit, you know that you are pretty right — and the fruit should have a deep red color,” Neville Bonney, an ethnobotanist who has been growing Quandongs for several years, said to Fresh Plaza.

Quandong is not the sole superfood that has been used by the aboriginals of Australia. Lemon Myrtle, which is normally found in Queensland and NSW, beats lemongrass when it comes to purity and flavor. In fact, it has the highest citrus content of any plant in the world. Aboriginal tribes used leaves of the Lemon Myrtle trees for medication.

The Blushwood Berry only grows naturally in the Daintree rainforests and the Atherton Tablelands. An extract from the inner seed of the fruit, called EBC-46, has been rumored to have the ability to kill cancer cells. Further research is being conducted. However, the fruit also contains toxins that can end up harming the body. So you should exercise caution when eating these berries.