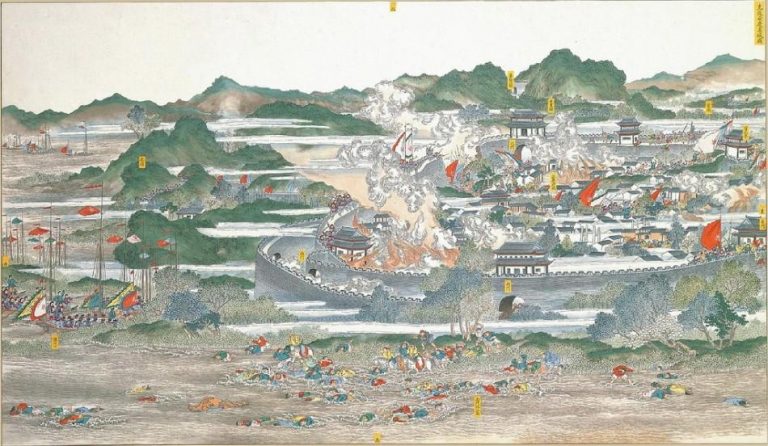 The Taiping Rebellion (1851-1864) was the largest civil war in China and had a long-lasting impact on Chinese history. (Image: wikimedia / CC0 1.0)

The Taiping Rebellion (1851-1864) was the largest civil war in China and was led by Hong Xiuquan, Shi Dakai, and others. It established the Taiping Heavenly Kingdom, a state the ruling Qing Dynasty refused to recognize, and had a long-lasting impact on Chinese history.

Shi Dakai, one of the generals of the Taiping Heavenly Kingdom army, was a legendary character. Before joining the army he was an educated, intelligent, wealthy man who loved to make friends with talented people and held dinners at his house for them. Each day, he rode out with dozens of these friends to enjoy fencing or wielding lances.

There was a mountain not far away from his house. A group of bandits lived there and made a living from robbing travelers going through the mountain pass. One day, a merchant from Fujian needed to go through the pass, but was afraid of being robbed. He visited Shi Dakai and asked for his protection. Shi agreed and went to pick up a company of guards to travel with the merchant to provide safe passage through the mountain.

The head of the bandits was exasperated when he learned about it and led hundreds of his henchmen to Shi’s home, intending to take it by force.

When Shi was told that they were coming, he opened the door of his home and invited the bandits to enter the house. He told them: “What you want is nothing but money. The merchant brought goods and traveled to a place far away from home to make a living from a small income. It is a tough job. If you take away his goods, he can only go home with empty hands. How can he do that? He shall have no means of surviving and will likely die on the way. I do not have the heart to see it happen and want to plead for him.”

The bandits were shocked at this unexpected turn of events and were confused. The leader said: “We have heard that Mr. Shi values righteousness over material interests. Now we see it with our own eyes. What we have done is not how humans should behave. We respect Mr. Shi’s noble actions and will spare the merchant. We dare not take the silver and will leave now.”

Shi was very pleased and prepared a feast for the merchant and invited the bandits to join them. The bandits enjoyed eating and drinking together with Shi, regretting that they did not have the opportunity to get to know him before then. At the end of the feast, the bandits bade farewell and Shi insisted on giving them the silver. They refused several times, but due to Shi’s insistence, they finally took half of what was offered.

The bandit leader was touched by Shi’s noble character and wanted to express his feelings. He sent his henchmen to inquire about the date of Shi’s birthday. On that day, the bandits brought with them presents of gold, jade, and embroidered clothing to celebrate. Shi held a feast for three days and the bandits were all present.

Someone who was jealous of Shi secretly informed the county magistrate that Shi harbored bandits at his home, which might develop into a local disaster for the region. The county magistrate, who also coveted Shi’s wealth, led a group of guards to Shi’s home. When they arrived, the feast was still in progress so the magistrate arrested Shi and all the bandits and threw them into prison.