Sound Sculptures: Listening to the Singing Ringing Tree in England 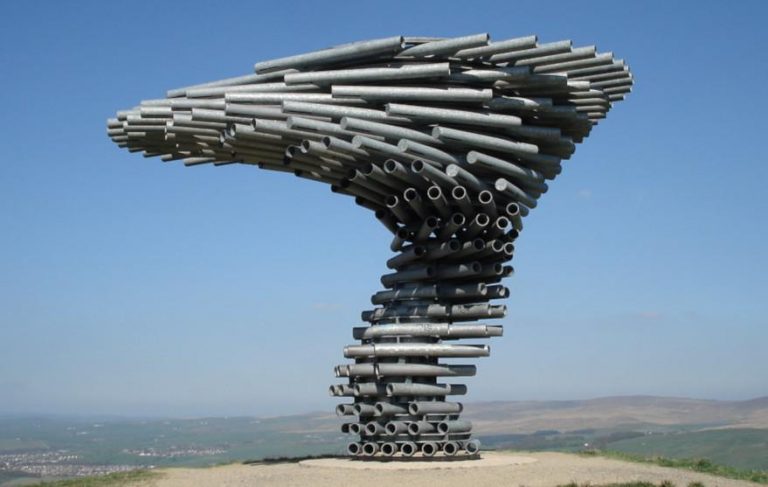 The Singing Ringing Tree, constructed in 2006, is a sound sculpture located in Burnley, Lancashire in the UK. (Image: Wendy Mann via Flickr)

Plan to visit the UK anytime soon? If so, you should check out the Singing Ringing Tree sound sculpture located in Burnley, Lancashire. Constructed in 2006, it is one of the few sculptures in the world that uses the energy of the wind to produce music.

The 10-foot tall Singing Ringing Tree sculpture is made from galvanized steel pipes that appear to be swirling in all directions. When the wind passes through these pipes, the structure produces a melodious hum that covers several octaves. Visitors are often taken aback by how the music seems jarring and harmonious at the same time, which is what actually lends the music it’s uniquely haunting beauty.

“The sculpture stands on the site of a former re-diffusion transmission station — with a run-down brick building and unused telegraph lines. These were dismantled — the telegraph lines were recycled — to make way for the Tree that was to stand out against the stark, rolling landscape of the Pennines,” according to Lancs Live. Creators of the Singing Ringing Tree sculpture added holes to the underside of each pipe so that they give off unique sounds.

Built by the architects Anna Liu and Mike Tonkin, the sculpture was part of a project that aimed to create memorable landmarks across Lancashire. The Royal Institute of British Architects (RIBA) gave them an award for architectural excellence in 2007. The Singing Ringing Tree was selected as one of the most defining landmarks of 21st century Britain by The Independent.

So how do people feel about it? “The views across the valley are spectacular and the noise the sculpture makes when the wind blows through it is eerie yet beautiful. I would definitely recommend this to people of all ages who like to see something unusual,” says a review (Trip Advisor).

London is home to the famous Aeolus Wind Pavilion. Located in the city’s Canary Wharf, the structure contains 310 stainless steel tubes connected to strings attached to a membrane. “Vibrations in strings attached to some of the tubes are transferred through skins covering the tops of the pavilion, and projected down through the tubes towards the viewer standing beneath the arch. The stings register the shifting landscape of wind around the artwork. The aim is for the public to be able to visualize this shifting wind map by interpreting the sound around them,” according to Evolo.

In the U.S., the Sound Garden installed on the campus of the National Oceanic and Atmospheric Administration (NOAA) in Seattle is an excellent example of a sound sculpture. Built by famous sculptor Douglas Holis, the Sound Garden features 12 structures that look similar to cell phone towers. These structures are hollow and contain organ pipes of varying lengths. When the wind blows around and through the pipes, low tones are produced.

Another sound sculpture in the United States is the Wave Organ in San Francisco. Created by artist Peter Richards, it is located near the Golden Gate Yacht Club in the Marina district. The entire sculpture contains 25 organ pipes made from PVC and concrete. Each structure is arranged at various elevations, with some extending below the sea. When waves hit the place, they push in air through the pipes, creating sounds of various kinds.