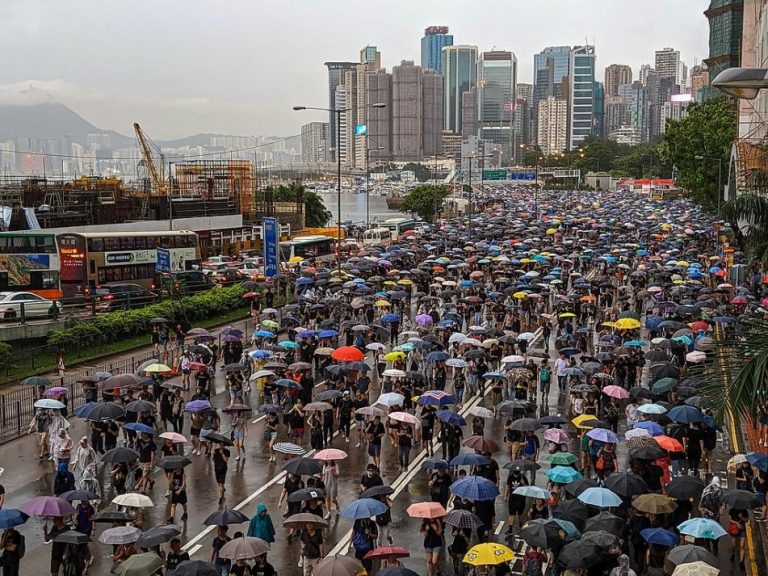 Thirty years after the fall of the Berlin Wall, the communist regime in China faces another mass democratic movement in Hong Kong.

The protests in Hong Kong are said to have negatively affected Hong Kong’s economy. Several businesses have been showing losses for the past few weeks and are worried about Hong Kong’s economic future. While pro-Beijing supporters are pointing fingers at the protester s for messing up the economy, the fact is that it is the Chinese government’s aggression in Hong Kong that is the root cause of the city’s woes.

“I think there will be damage to the reputation of Hong Kong… Some companies may want to leave Hong Kong, or at least not have their headquarters here,” Yumi Yung, a 35-year-old who works in the FinTech industry, said to Reuters.

Tiffany & Co., a U.S.-based jeweler, reported that their sales fell by 3 percent and net earnings declined by 6 percent in the second quarter due to the protests. Hong Kong is the fourth biggest market for Tiffany in terms of total sales. The Hong Kong Retail Management Association revealed that most of their members saw a 50 percent decline in sales in the first three weeks of August. Sales for June fell by 6.7 percent year on year. Consultancy firm Capital Economic foresees a recession in Hong Kong in the third quarter.

“Retail sales are particularly badly affected and mainland tourism has fallen… Four percent of Hong Kong’s GDP is from tourism and 75 percent of tourists are from the mainland and they’ve stopped going because of the way the protests are portrayed there. We see this continuing deep into [the third quarter] with a technical recession — the first since the global financial crisis,” Julian Evans-Pritchard, Senior China Economist at Capital Economics, said to The Guardian.

Beijing’s propaganda team runs a narrative that squarely blames protesters for the dismal performance of Hong Kong’s economy. While it is true that the unrest is causing the current stress in the city’s economy, one must keep in mind that the unrest is simply a reaction to Beijing’s aggressive interference in Hong Kong.

The protesters did not randomly decide to disrupt trade with any ill intention toward Hong Kong. They are protesting to ensure that the communist government of China does not succeed in revoking freedoms enjoyed by the citizens of the city. If Beijing had left Hong Kong alone and honored the “one country, two systems” arrangement that it had agreed upon two decades back, the protests wouldn’t even have happened. The real cause of Hong Kong’s economic troubles is not the demonstrators, but the Chinese Communist Party.

The unrest in Hong Kong has triggered talks about finding an alternative Asian financial capital. Singapore shows up at the top of the list for most economic experts. “If Beijing told financial firms they had to set up in Shanghai or get no more China business, they would all relocate within a week… As China takes more control of Hong Kong, I expect private banking will become more Singapore-based,” Kenneth Courtis, former managing director of Goldman Sachs, said to South China Morning Post.

Courtis believes that while marketing functions of financial businesses will remain in Hong Kong, the accounts will end up being held in Singapore or other countries like Switzerland. Singapore functions on Western common law, with its legal system also honoring many of the human rights policies championed by the U.S. As such, it should not come as a surprise if major financial corporations in Hong Kong eventually relocate to Singapore to avoid the clutches of the Chinese regime.