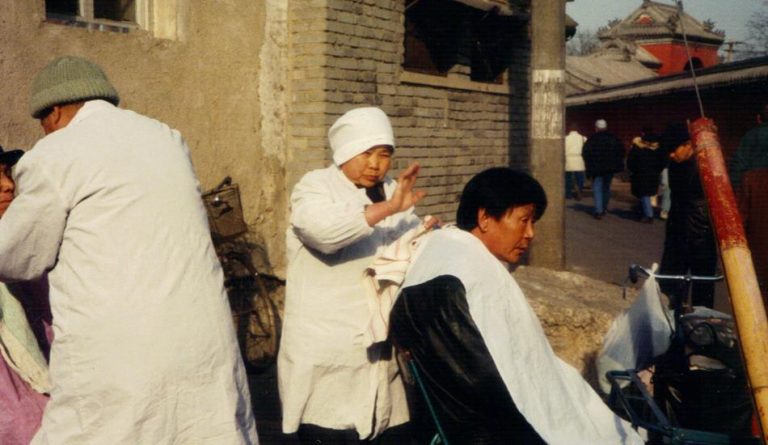 In China, barbers used to traditionally operate on street sides. Only in modern times has customer privacy become a thing in barbershops. Nowadays, only a few street barbers remain in China, most of the old-timers who just keep on doing what they’ve been doing for a long time. But when they finally retire, it’ll be the end of an era and there will no longer be any roadside barbers.

Street barbers were first documented in China in the 14th century. Many of these barbers were travelers, setting up shop in places they visited. They used to cut hair, shave faces, and clean the ears with tools like scissors, tweezers, brushes, and razors, all of which were stored in a wooden box. Today, street barbers are largely old people whose customers also tend to be the older sections of society.

“They are old in age, old in style, and seemingly equipped with nothing more than a rickety chair and a squeaky pair of scissors. They are a true throwback to a bygone era. Don’t come here expecting the latest trends (there’s a reason why the typical clientele are of more advanced age). Don’t expect nice, comfy surroundings either. Economical and efficient is what you can expect. What you see is very much what you get with the street barber,” according to Lord Hair.

Interestingly, the Chinese barbers that work in the street share a strong similarity to the Western shoe shiners of the past century who used to polish shoes by the roadside. Today, people would consider it barbaric to have someone bow down and clean their shoes in public. The same is the case with street barbers in China.

The young Chinese, who grew up in an era where privacy is valued, would be horrified to sit by the street and get their hair cut or trimmed while people walk around. The only exception would be in rural areas where getting a haircut from street barbers continue to be an “okay” thing for youngsters.

While barbers now work indoors and undergo professional training, it does not mean that they have become perfect compared to their street counterparts. In fact, they are still prone to making mistakes, sometimes pretty amusing ones.

A Chinese barber recently trimmed the hair of his customer in a way that lit up social media. The customer apparently showed the barber a video of the hairstyle he wanted. Unfortunately, a triangular play button overlaid the video. The barber, who saw what the customer wanted, ended up creating triangular patches on both sides of the head. When the customer saw what just happened, he was shocked. But the person soon calmed down and looked on the bright side, and decided to keep the look.

The man took a photo of his shaved head and posted it online. He joked that it was extremely hard to find such a barber who paid close attention to a customer’s need and fulfilled it perfectly. The post soon went viral after it was shared by entertainment blogger Tian Xiu Bot. It got shared over 22,000 times and garnered more than 78,500 likes. The post also attracted 20,000-plus comments. Some of the commenters started asking for the barber’s address. People also said that the hairstyle might soon trend across China.