US-China Trade Conflict: How and When Will It End? 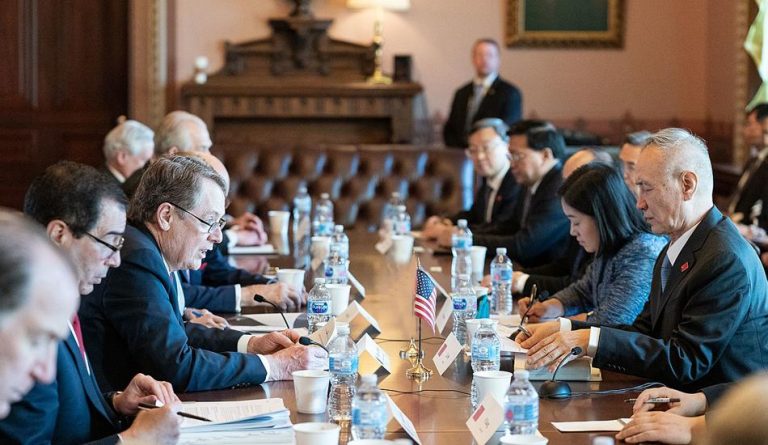 The trade war between the U.S. and China has been going on for the past several months, and many people are starting to wonder why the trade talks haven’t been able to resolve the dispute. (Image: via Wikimedia Commons)

The trade war between the U.S. and China has been going on for the past several months, and many people are starting to wonder why the trade talks haven’t been able to resolve the dispute. There is a good reason why both nations are unable to arrive at a satisfactory agreement — the Chinese Communist Party (CCP).

A massive reformation of the CCP and the Chinese political structure is necessary to not only solve the trade conflict permanently, but to develop better relations between China and the West. In this regard, Taiwan can serve as an inspiration for big brother, China.

The constitution of the Republic of China (ROC), also known as Taiwan, was ratified by the country’s parliament in 1946 and eventually adopted in 1947. From its inception, Taiwan was ruled by a single party — the KMT. The party maintained an authoritarian government similar to the communists in China, suppressing individual freedoms and having complete control over the media.

All that changed in 1986 when President Chiang Ching-kuo lifted bans on new political parties and made a free press a possibility. A year later, martial law was banned. In 1992, Taiwan conducted its first democratic elections. The country, today, is a prosperous region and stands proud of its liberal democracy thanks to the efforts of Chiang Ching-kuo.

China faces a similar situation, although of much bigger proportions. Just like with Taiwan in the 1980s, China is completely under the grip of the CCP. Citizens do not enjoy freedom of speech, nor are free and fair elections held.

The leader of the Party, Xi Jinping, rules with an iron fist, allowing no opposing voices to question the rule of the CCP. This is also the reason why the U.S. finds it difficult negotiating a trade deal with China. A country ruled by an authoritarian power has no concept of “compromise.” The only thing the CCP knows is to give orders and expect everyone to unquestionably obey.

The U.S. has demanded that China ensure stronger protection of intellectual property rights, open up its market to foreign companies without discrimination, and develop a balanced trading relationship between the two countries. However, the talks hit the brakes when the U.S. insisted that every commitment that Beijing makes must be written down in the final trade deal. This ticked off Beijing since the CCP apparently did not have any intention of honoring whatever agreement the two countries made during the talks.

Implementing the demands of the U.S. would mean that the CCP would lose significant control over the Chinese economy that it currently tightly regulates. Given how obsessed Beijing is with controlling every aspect of Chinese society, it is no wonder that the CCP does not wish to accede to most of the demands made by the American government. This behavior comes from the inherent nature of the CCP.

Were the CCP democratic, it might have implemented some of the U.S. demands in order to appease the public and to win re-election next time. However, the CCP does not face such pressure at all. It can force whatever it decides on the public and face no consequences. Whether millions of Chinese people lose jobs and have to live in poverty because of the Party’s unflinching attitude does not bother the CCP one bit. And this is where the big structural change has to take place in China.

Despite being the leader of an authoritarian party, Xi Jinping is widely respected around the world. The international community sees him as someone who can possibly bring about reforms that might eventually make China a full-fledged democracy. If he does bring about these changes, it would literally ease all the tensions existing between China and the West. The question is whether Xi will live up to those expectations. If he fails and the CCP remains an authoritarian regime, not only will the trade conflict between China and the U.S. grow more severe over time, the two superpowers may even engage in a full-blown war.

Arriving at a deal

Larry Kudlow, the economic advisor to the White House, recently stated that the U.S. is preparing for a visit by the Chinese delegation in the month of September to continue with the talks. President Donald Trump suggested that Beijing was looking to end the trade conflict as soon as possible. “They hurt very badly, but they understand this is the right thing to do… We’re going to start very shortly to negotiate… but I think we’re going to make a deal,” he said to BBC.

In a recent tweet, Trump accused China of stealing hundreds of billions of dollars worth of intellectual property every year and “ordered” U.S. companies in China to shift their operations to the United States. If the trade talks produce no tangible result in the coming months, experts feel that Trump will seriously consider bringing U.S. companies back home.