Wildfires or Misfires: What’s Really Burning in the Amazon? 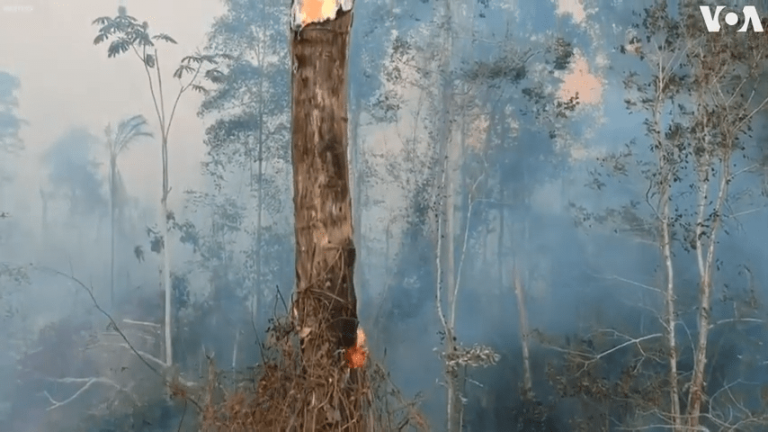 The forest fires in the Amazon have bumped up Ecosia's user base. (Image: Screenshot / YouTube)

The Amazon rainforest has been on fire for much of the past month. Instead of working together to put out the fires, politicians seem to be caught up in their own petty fights. To make matters worse, misinformation, hype, and fake images are being widely circulated, stirring up fear and alarm.

Brazil is seeing a record number of fires this year. In fact, the incidence of forest fires is up by 85 percent since last year and is the highest reported since record-keeping began six years ago. According to Brazil’s space research center, INPE, almost 80,000 fires have been detected in 2019 so far. The number of fires currently burning in the Amazon is so high that smoke can be seen from space.

But “record-breaking fires” is a term that has no weight, since record-keeping goes back only to 2013. And along with the NASA satellite image that captured the smoke from space, most news outlets failed to mention the accompanying NASA caption: “As of August 16, 2019, an analysis of NASA satellite data indicated that total fire activity across the Amazon basin this year has been close to the average in comparison to the past 15 years.”

“According to NASA’s Global Fire Emissions Database, activity is above average in the states of Amazonas and Rondonia, but so far is below average in Mato Grosso and Pará,” (The Epoch Times).

Annually, July and August herald the onset of the dry season in the Amazon region. These months typically see an increase in the number of fires every year. The activity apparently peaks in September before fizzling out by November. Most of the fires are attributed to human activity as people seek to clear out the forest in order to capture land for ranching or farming. Concerned by this, the Brazilian government, led by President Jair Bolsonaro, has banned setting fires to clear land for a period of 60 days.

Amid the crisis, what stands out is that the political leaders of the world seem to be more concerned with their personal wars rather than getting together to solve the problem. When the G7 nations announced an aid package of US$20 million for Brazil to help the country in its fight against the fires, Bolsonaro declined it, claiming that the money makes his country look like a colony. His chief of staff called the aid money imperialist and colonialist.

The real reason for not accepting the aid seems to be personal tensions between Bolsonaro and French President Emmanuel Macron. Earlier, Bolsonaro had mocked the age gap between Macron and his wife. The French president is 41 years of age while his wife is far older at 66. In response, Macron called Bolsonaro “rude.” This seems to have ticked off the Brazilian president, who went on to refuse the G7 money.

However, Bolsonaro recently indicated that he is open to accepting the money, provided that Macron apologizes. “First of all, Mr. Macron must retract the insults he gave me. First, he called me a liar. Then, the information I had is that our sovereignty is up for grabs in the Amazon… So, before talking or accepting anything that comes out of France’s best possible intentions, he will have to take those words out and then we can talk,” he said in a statement (Independent).

Fake reports and statistics are circulating online creating a sense of fear and urgency about the crisis. Some groups are soliciting funds in the name of helping communities affected by the fire and protecting the Amazon moving forward. Multiple Instagram accounts are encouraging people to donate to their campaigns. One such fake charity that was being run in the name of National Geographic promised to donate $1 for every like received on their posts.

A popular myth going around is that the Amazon produces around 20 percent of the world’s oxygen. This is a wrong claim, according to several experts. Yadvinder Malhi, an ecosystem ecologist at Oxford University’s Environmental Change Institute, says that the Amazon generates around 16 percent of the oxygen produced on land. But if we include the oxygen produced by phytoplankton in the ocean, the Amazon’s contribution to the world’s oxygen amounts to only 9 percent. Now, trees don’t just exhale oxygen, they also inhale it. In fact, trees inhale a bit more oxygen than they exhale. When this is also taken into account, the net oxygen effect of the Amazon comes to around zero.

French President Macron parroted the 20 percent oxygen myth in one of his tweets while also circulating a fake image. His tweet was countered by Brazilian athlete Ana Paula Henkel. “Mr Macron, the Amazon does not produce 20% of the planet’s oxigen. Secondly, the photo you used is very old from years ago, that’s called ‘fake news’ these days and does NOT help the Amazon. Last but not least, you have an approval rating of 22% in France, fix your house first,” she said in a tweet.

Celebrities like Leonardo DiCaprio, Madonna, Cristiano Ronaldo, Jaden Smith, and others have all been propagating such fake news and photos without actually realizing that their claims are false. Though it is indisputable that the fires raging in the Amazon are a menace that needs to be stopped, spreading incorrect information doesn’t help in the least.