For First Time, Astronomers Catch Asteroid in the Act of Changing Color 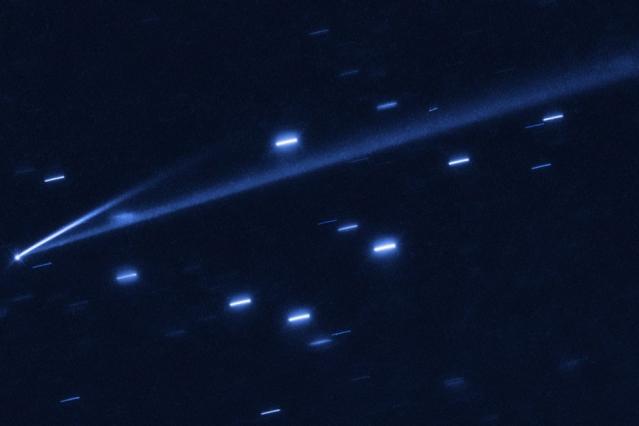 Last December, scientists discovered an “active” asteroid within the asteroid belt sandwiched between the orbits of Mars and Jupiter. The space rock, designated by astronomers as 6478 Gault, appeared to be leaving two trails of dust in its wake — active behavior that is associated with comets, but which is rarely seen in asteroids.

While astronomers are still puzzling over the cause of Gault’s comet-like activity, an MIT-led team now reports that it has caught the asteroid in the act of changing color, in the near-infrared spectrum, from red to blue. It is the first time scientists have observed a color-shifting asteroid, in real-time.

“That was a very big surprise.

“We think we have witnessed the asteroid losing its reddish dust to space, and we are seeing the asteroid’s underlying, fresh blue layers.”

Marsset and his colleagues have also confirmed that the asteroid is rocky — proof that the asteroid’s tail, though seemingly comet-like, is caused by an entirely different mechanism, as comets are not rocky, but more like loose snowballs of ice and dust. Marsset says:

“It’s the first time to my knowledge that we see a rocky body emitting dust, a little bit like a comet.

“It means that probably some mechanism responsible for dust emission is different from comets, and different from most other active main-belt asteroids.”

Marsset and his colleagues, including EAPS Research Scientist Francesca DeMeo and Professor Richard Binzel, have published their results in the journal Astrophysical Journal Letters.

A rock with tails

Astronomers first discovered 6478 Gault in 1988 and named the asteroid after planetary geologist Donald Gault. Until recently, the space rock was seen as relatively average, measuring about 2.5 miles wide and orbiting along with millions of other bits of rock and dust within the inner region of the asteroid belt, 214 million miles from the Sun.

In January, images from various observatories, including NASA’s Hubble Space Telescope, captured two narrow, comet-like tails trailing the asteroid. Astronomers estimate that the longer tail stretches half a million miles out, while the shorter tail is about a quarter as long.

The tails, they concluded, must consist of tens of millions of kilograms of dust being actively ejected by the asteroid into space. But how? The question reignited interest in Gault, and studies since then have unearthed past instances of similar activity by the asteroid. Marsset said:

“We know of about a million bodies between Mars and Jupiter, and maybe about 20 that are active in the asteroid belt.

He and his colleagues joined the search for answers to Gault’s activity in March, when they secured observation time at NASA’s Infrared Telescope Facility (IRTF) on Mauna Kea, Hawaii. Over two nights, they observed the asteroid and used a high-precision spectrograph to divide the asteroid’s incoming light into various frequencies, or colors, the relative intensities of which can give scientists an idea of an object’s composition.

From their analysis, the team determined that the asteroid’s surface is composed mainly of silicate, a dry, rocky material similar to most other asteroids, and, more importantly, not at all like most comets.

Comets typically come from the far colder edges of the solar system. When they approach the Sun, any surface ice instantly sublimates, or vaporizes, into gas, creating the comet’s characteristic tail. Since Marsset’s team has found 6478 Gault is a dry, rocky body, this means it likely is generating dust tails by some other active mechanism.

As the team observed the asteroid, they discovered, to their surprise, that the rock was changing color in the near-infrared from red to blue. Co-author DeMeo said:

“We’ve never seen such a dramatic change like this over such a short period of time.”

The scientists say they are likely seeing the asteroid’s surface dust, turned red over millions of years of exposure to the Sun, being ejected into space, revealing a fresh, less irradiated surface beneath that appears blue at near-infrared wavelengths. DeMeo added:

“Interestingly, you only need a very thin layer to be removed to see a change in the spectrum.

“It could be as thin as a single layer of grains just microns deep.”

So what could be causing the asteroid to turn color? The team and other groups studying 6478 Gault believe the reason for the color shift, and the asteroid’s comet-like activity, is likely due to the same mechanism: a fast spin. The asteroid may be spinning fast enough to whip off layers of dust from its surface through sheer centrifugal force.

The researchers estimate it would need to have about a 2-hour rotation period, spinning around every couple of hours, versus Earth’s 24-hour period. Marsset said:

“About 10 percent of asteroids spin very fast, meaning with a two- to three-hour rotation period, and it’s most likely due to the sun spinning them up.”

This spinning phenomenon is known as the YORP effect (or the Yarkovsky-O’Keefe-Radzievskii-Paddack effect, named after the scientists who discovered it), which refers to the effect of solar radiation, or photons, on small, nearby bodies such as asteroids.

While asteroids reflect most of this radiation back into space, a fraction of these photons are absorbed, then reemitted as heat, and also momentum. This creates a small force that, over millions of years, can cause the asteroid to spin faster.

Astronomers have observed the YORP effect on a handful of asteroids in the past. To confirm a similar effect is acting on 6478 Gault, researchers will have to detect its spin through light curves — measurements of the asteroid’s brightness over time.

The challenge will be to see through the asteroid’s considerable dust tail, which can obscure key portions of the asteroid’s light. Marsset’s team, along with other groups, plan to study the asteroid for further clues to activity, when it next becomes visible in the sky. DeMeo said:

“I think [the group’s study] reinforces the fact that the asteroid belt is a really dynamic place.

“While the asteroid fields you see in the movies, all crashing into each other, is an exaggeration, there is definitely a lot happening out there every moment.”