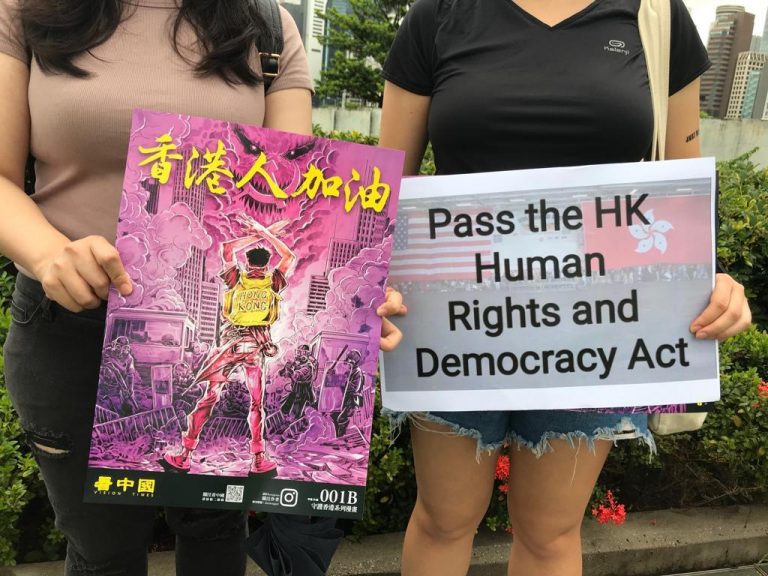 Hong Kong students, at the beginning of the week, boycott schools and universities to rally for democracy and Hong Kong's freedom. (Image: Mona Song / Nspirement)

Thousands of Hong Kong students left schools and universitiesy to peacefully rally for democracy on Monday, Sept. 2. Even during the strong rain, more than 40,000 people from various social fields, such as social workers, medical employees, and lawyers, joined the rally in support of the underlying democratic cause.

On Monday, the organizer said that they plan to stay for two days, and hope more people join the broader call to retain freedoms and values that make Hong Kong distinct from mainland China.

Unfortunately, one of the main pain points for protesters both peaceful and active has been the ongoing police violence at most pro-democratic events. A speaker from the worker alliance, Li Zhuo Ren, said in an interview with Hong Kong media that last Saturday, policeman came to a subway to randomly beat anyone wearing a black shirt. Li believes that the rally is an effective way to show the government how dissatisfied the general public is.

Many Hong Kong residents also urge the international community to support the democratic appeal by taking a clear stance.

Is Hong Kong turning into a police state?

Many people critical of Beijing’s growing grip accuse the mainland’s regime of attempting to slowly erode Hong Kong’s unique degree of autonomy. Many have the impression that Hong Kong is turning into a police state.

The most recent student rallies and school boycott are an appeal to the Hong Kong government, urging it to finally respond to the 5 demands brought forth by Hong Kong’s pro-democracy movement.

The five demands are:

So far, the pro-democratic movement has induced dramatic reactions from China’s communist government and Hong Kong’s law enforcement, which has been shown to be under the tight grip of the Chinese communist regime. They do not favor any pro-democratic sentiments, especially in a special region that for decades it has been trying to assimilate into its Communist Party-ruled territory.

Protests, rallies, and parades have regularly been held since June in the streets of Hong Kong. Protesters gathering in public places like parks and the airport are a normal sight these days.

Students clarifying the circumstances to visitors and the public have noticeably become a thorn in the eye of those weary of anything democratic, as China’s communist regime does not tolerate anyone who opposes its general agenda and propaganda narrative.

Hong Kong’s people yet to get a favorable official response

On Monday, according to resident pro-democracy advocates, more than 85 days have passed since Hong Kong’s people have taken to the streets to demand the withdrawal of the Extradition Bill.

International critics, as well as pro-democracy spokespeople in Hong Kong, have repeatedly expressed their frustration about how the people’s diplomatic attempts to open talks have been turned down and have often been met with strong violence by the Hong Kong policemen.

Allegedly, cases of Chinese military personnel dressed as protesters have been reported. They would incite skirmishes at the protests or randomly beat up pro-democratic protesters, according to unnamed sources.

Pressure on anyone advocating democracy

A speaker who is also an employee working in the financial sector told media that his company sent out a notice to every employee disapproving of any participation of its staff in an unapproved rally. They were also urged not to post any political opinions on social media.

Many Hong Kong residents feel that the so-called “white terror” is spreading.

One airline company in Hong Kong, Cathay Pacific, recently dismissed 21 members of its staff for reportedly being involved in the ongoing protests. Another 10 have been laid off from work while their police records are being checked.

As a result of the ongoing turmoil, the autonomous Chinese region is also facing its first recession in a decade, according to Reuters, a further stepping stone that China is using to put pressure on Hong Kong officials to eradicate the protests by any means.

Watch the following video with touching images and scenes of the above-mentioned rally in Hong Kong: