Corruption in China Exposed During Protest in Canada 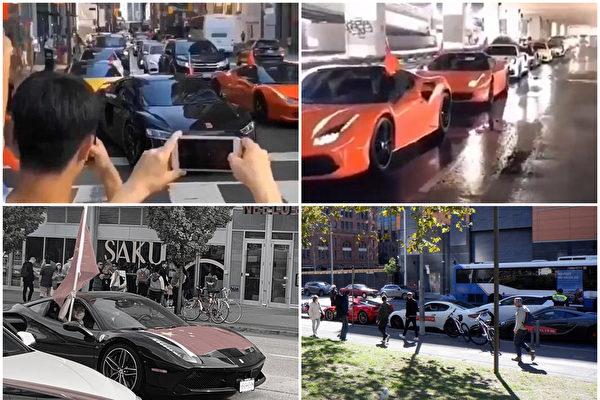 At a recent rally, students from Mainland China studying in Canada participated in a protest in support of the Hong Kong police and against the pro-Hong Kong movement. In a video clip of the protest, which was held in Toronto, Canada, at least eight or nine exotic sports cars, including Ferraris and other cars, were seen carrying the Chinese national flag.  While revving their engines and sounding their horns, these children of wealthy families and officials hurled insults against Hong Kong protesters.

What these overseas students didn’t realize was that video of the parade would be viewed in Mainland China many, many times, and viewed with close scrutiny. Canada has a large number of native Hong Kongers living in Canada, as many migrated when the Chinese Communist Party assumed control in 1997. Being so used to showing off their wealth while living abroad, the Mainland students never stopped to think that those in Mainland China and elsewhere might not take kindly to their “protest.”

The video caused people in Mainland China to vent their anger on social media and questioned the source of the student’s wealth and taste in exotic cars, which range in price from US$200,000-US$400,000.  “Where do these people’s money and cars come from? It’s definitely not from hard-earned money in Canada.” said a person from the Ministry of Foreign Affairs of the Communist Party of China.

Several netizens called for an investigation into the family backgrounds of the students and their source of wealth. “Please check into every individual car owner and track down the family of these corrupt elements. Isn’t Mainland China against corruption? This is a godsend opportunity. It is easy to track from the car license plate and find the mansions of these people,” said one respondent from the  Mainland.

One former Hong Kong resident living in Canada said: “Driving expensive cars in Canada, using their family’s money, and shouting insults at the Hong Kong people saying they are poor. How do you expect the people in the country to feel good?”

The video has since been taken down, but not before the damage was done. At least one student’s car has been traced back to an official in Shandong Province, raising questions about the source of his wealth.