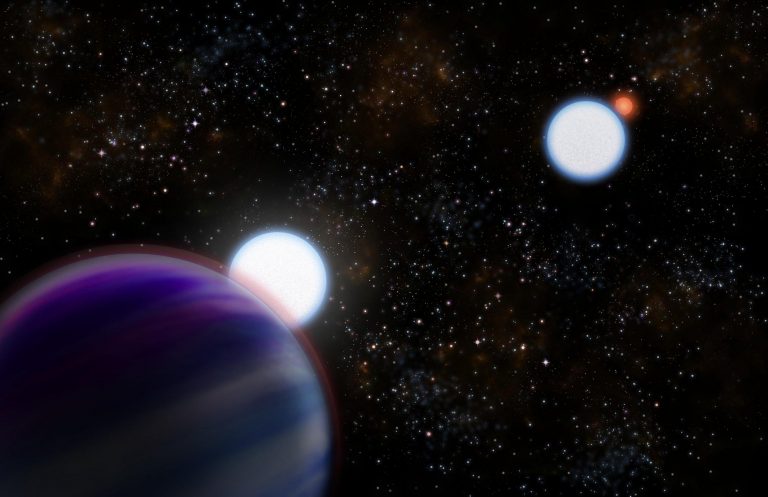 The findings not only classify a Jupiter-sized exoplanet in a close binary star system, but also conclusively demonstrate, for the first time, which star the planet orbits. (Image: Gemini Observatory / NSF / AURA / Artwork by Joy Pollard)

In an unprecedented feat, an American research team discovered hidden secrets of an elusive exoplanet using a powerful new instrument at the 8-meter Gemini North telescope on Maunakea in Hawai’i. The findings not only classify a Jupiter-sized exoplanet in a close binary star system, but also conclusively demonstrate, for the first time, which star the planet orbits. Finally, there’s an instrument that can conclusively reveal the secrets of exoplanets.

The breakthrough occurred when Steve B. Howell of the NASA Ames Research Center and his team used a high-resolution imaging instrument of their design — named ‘Alopeke (a contemporary Hawaiian word for fox). The team observed exoplanet Kepler-13b as it passed in front of (transited) one of the stars in the Kepler-13AB binary star system some 2,000 light-years distant.

Prior to this attempt, the true nature of the exoplanet was a mystery. The research was published in the Astronomical Journal. Howell said:

“There was confusion over Kepler-13b: Was it a low-mass star or a hot Jupiter-like world? So we devised an experiment using the sly instrument ‘Alopeke.

“We monitored both stars, Kepler A and Kepler B, simultaneously while looking for any changes in brightness during the planet’s transit.

“To our pleasure, we not only solved the mystery, but also opened a window into a new era of exoplanet research.”

Chris Davis of the National Science Foundation, one of Gemini’s sponsoring agencies, added:

“This dual win has elevated the importance of instruments like ‘Alopeke in exoplanet research.

“The exquisite seeing and telescope abilities of Gemini Observatory, as well as the innovative ‘Alopeke instrument, made this discovery possible in merely four hours of observations.”

‘Alopeke performs “speckle imaging,” collecting a thousand 60-millisecond exposures every minute. After processing this large amount of data, the final images are free of the adverse effects of atmospheric turbulence — which can bloat, blur, and distort star images. Howell said:

“About one half of all exoplanets orbit a star residing in a binary system, yet, until now, we were at a loss to robustly determine which star hosts the planet.”

The team’s analysis revealed a clear drop in the light from Kepler A, proving that the exoplanet orbits the brighter of the two stars. Moreover, ‘Alopeke simultaneously provides data at both red and blue wavelengths, an unusual capability for speckle imagers. Comparing the red and blue data, the researchers were surprised to discover that the dip in the star’s blue light was about twice as deep as the dip seen in red light.

This can be explained by a hot exoplanet with a very extended atmosphere, which more effectively blocks the light at blue wavelengths. Thus, these multi-color speckle observations give a tantalizing glimpse into the appearance of this distant world.

Early observations once pointed to the transiting object being either a low-mass star or a brown dwarf (an object somewhere between the heaviest planets and the lightest stars). But Howell and his team’s research almost certainly shows the object to be a Jupiter-like gas-giant exoplanet with a “puffed up” atmosphere due to exposure to the tremendous radiation from its host star.

‘Alopeke has an identical twin at the Gemini South telescope in Chile, named Zorro, which is the word for fox in Spanish. Like ‘Alopeke, Zorro is capable of speckle imaging in both blue and red wavelengths.

The presence of these instruments in both hemispheres allows Gemini Observatory to resolve the thousands of exoplanets known to be in multiple star systems. Team member and ‘Alopeke instrument scientist Andrew Stephens at the Gemini North telescope said:

“Combined with Gemini’s large primary mirror, ‘Alopeke has real potential to make even more significant exoplanet discoveries by adding another dimension to the search.”

First proposed by French astronomer Antoine Labeyrie in 1970, speckle imaging is based on the idea that atmospheric turbulence can be “frozen” when obtaining very short exposures. In these short exposures, stars look like collections of little spots, or speckles, where each of these speckles has the size of the telescope’s optimal limit of resolution.

When taking many exposures, and using a clever mathematical approach, these speckles can be reconstructed to form the true image of the source, removing the effect of atmospheric turbulence. The result is the highest-quality image that a telescope can produce, effectively obtaining space-based resolution from the ground — making these instruments superb probes of extrasolar environments that may harbor planets.

The discovery of planets orbiting other stars has changed the view of our place in the Universe. Space missions like NASA’s Kepler/K2 Space Telescope and the Transiting Exoplanet Survey Satellite (TESS) have revealed that there are twice as many planets orbiting stars in the sky than there are stars visible to the unaided eyes; to date, the total discovery count hovers around 4,000.

While these telescopes detect exoplanets by looking for tiny dips in the brightness of a star when a planet crosses in front of it, they have their limits. Howell said:

“These missions observe large fields of view containing hundreds of thousands of stars, so they don’t have the fine spatial resolution necessary to probe deeper.

“One of the major discoveries of exoplanet research is that about one-half of all exoplanets orbit stars that reside in binary systems. Making sense of these complex systems requires technologies that can conduct time sensitive observations and investigate the finer details with exceptional clarity.”

“Our work with Kepler-13b stands as a model for future research of exoplanets in multiple star systems.

“The observations highlight the ability of high-resolution imaging with powerful telescopes like Gemini to not only assess which stars with planets are in binaries, but also robustly determine which of the stars the exoplanet orbits.”