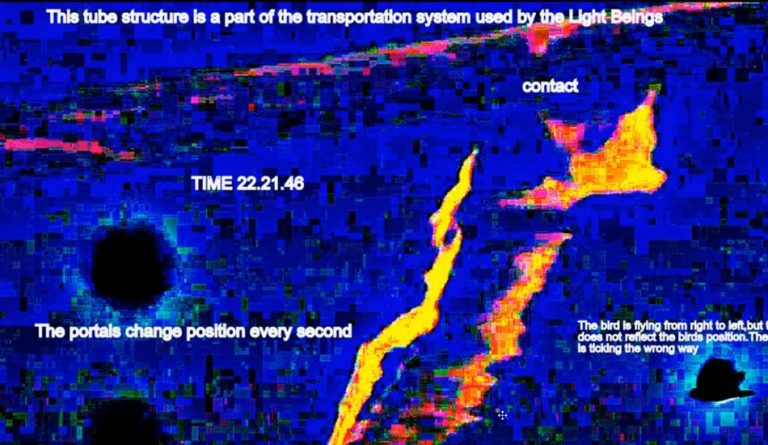 The video claims that the images shown depict fractures in the space-time continuum. (Image: YouTube/Screenshot)

Time travel has always been an idea that evokes wonder among science enthusiasts. Though many researchers have proposed hypotheses that predict the possibility of time travel, no one has been able to prove these theories. However, a YouTube channel, Frank Klever, published a video that claims to have evidence of time travel.

Klever states that the video shows tears in the space-time continuum over the sky of Oslo, Norway. In the video, the narrator shows several images with a blue background on which pink blobs and streaks of light can be seen. According to Klever, the blobs and light streaks are two interdimensional portals that appeared in the sky. He calls the colored light sources “angels” or “energies.” The images were taken in 2015.

The YouTuber claims that the portals keep changing their position every few seconds. He points to a bird-shaped object in the image and says that even though the object traveled from one location to another, the time does not reflect this change in position. “Look at the position of the bird right there. What are we looking at? Well, you can see now that the bird is now further to the right in this frame, which is impossible because it is flying from right to left and the time is going forward not backward. Is this proof of time travel? That’s the question,” he asks in the video.

With regard to the authenticity of the video, there is simply nothing to support the idea that the multi-colored lights and blobs seen in the image are space-time fractures. However, this does not mean that time travel is not a possibility. Several researchers have admitted that time travel might eventually become a reality. In fact, famous physicist Stephen Hawking supported the theory in his book Brief Answers to the Big Questions. “Rapid space travel and travel back in time can’t be ruled out according to our present understanding… Science fiction fans need not lose heart: there’s hope in M theory,” he says in the book (Forbes).

In January this year, a professor of Physics at the University of Massachusetts, Gaurav Khanna, proposed the possibility that black holes might allow us to travel to another time or even an entirely different universe or dimension. In 2016, one of his students wanted to test if falling into a black hole is survivable. The student, Caroline Mallary, created a computer model that captured the physical effects of a spacecraft that falls into a large, rotating black hole. What she discovered was interesting.

Mallary apparently also discovered something that was not fully appreciated previously. The effect of a singularity in a rotating black hole will usually cause cycles of squeezing and stretching on the craft. However, for large black holes, the strength of the effect would be very minimal, pointing to the possibility that the people on board will not even detect it.