Man Gets Thrown in Jail for Sharing Picture of Dalai Lama 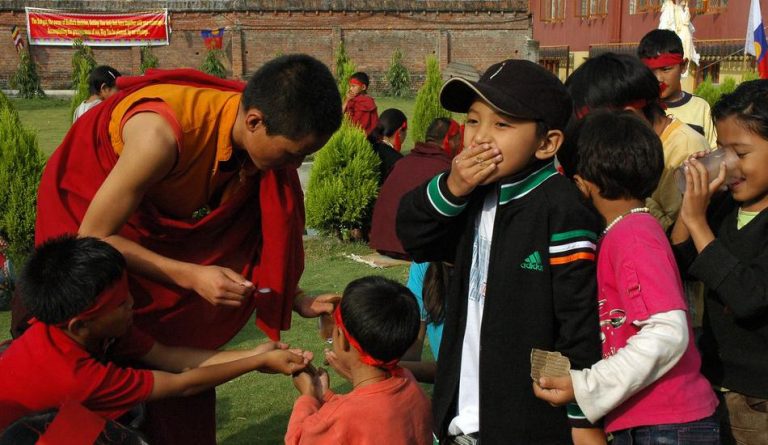 Tibetan schools have been asked not to keep images of the Dalai Lama on their premises. (Image: Wonderlane via Flickr)

Displaying its blatant hatred for Tibetan Buddhists, Beijing arrested a man for sharing a picture of the spiritual leader the Dalai Lama through the social media platform WeChat. The incident took place in July and the person, Rinso from Dzoege County, was released a few days later.

“Police released him [Rinso] on July 16 after he spent 10 days in custody… Chinese authorities are closely monitoring discussions on WeChat, and are quick to intervene… It is better to avoid speaking openly about certain things, and to avoid sharing photos,” an anonymous source said to Radio Free Asia (RFA).

News of Rinso’s arrest and detention is only coming out now because China severely restricted any contact between Tibet and the outside world for much of July. The Chinese government sees the Dalai Lama as a threat to its hold over Tibet and punishes people who show any sympathy for the spiritual leader.

In fact, the authorities are reportedly offering more than US$40,000 in cash rewards for Tibetans who inform about social media users deemed disloyal to communist China. According to the government department of Tibet Autonomous Region, “disloyalty” not only includes advocating extremism or defaming the country, but also any online support for the Dalai Lama’s call for greater autonomy in Tibet.

In July, authorities cracked down on people from a Tibetan village who were found to have prayed publicly for the Dalai Lama’s long life. The villagers also had photos of the spiritual leader in their homes, something that is expressly prohibited by local laws. “They found the photos of the Dalai Lama on display in the homes when they were inspecting the housing units… Later the local officials returned, accompanied by armed police dressed in black, and took down and confiscated all the photos, beating and slapping anyone who had put the pictures up in their homes,” a source said to RFA.

Chinese officials are visiting Tibetan schools and warning the administrations not to place any photos of the Dalai Lama in their buildings. The drive to remove all images of the Dalai Lama has intensified, with authorities traveling to even the most remote regions of Tibet to implement the ban. Earlier, the Dalai Lama mentioned that the next leader of the spiritual order might come from outside China. This rattled Beijing, which plans on installing a Chinese person loyal to the Party as the new Dalai Lama.

US support for Tibet

In early August, a delegation from the U.S. Congress met with the president of the Tibetan-government-in-exile in Dharamshala, India. The president, Dr. Lobsang Sangay, introduced the U.S. members to their idea of democracy and also sought support for the Tibetan Policy Act of 2002, a legislative measure that guides U.S. policy toward Tibet.

The U.S. delegation was led by Congressman David Price, who pledged U.S. support for the Tibetan cause. “We in the United States are particularly proud of the long-standing partnership of the U.S and the Central Tibetan Administration, and with His Holiness the Dalai Lama,” he said in a statement (The Tibet Post).

Last December, U.S. President Donald Trump signed into effect a law that mandated the State Department punish Chinese officials who are found guilty of blocking American citizens from accessing Tibet. The persecution of Tibetan Buddhists has been an issue that the U.S. administration has raised in several international forums.