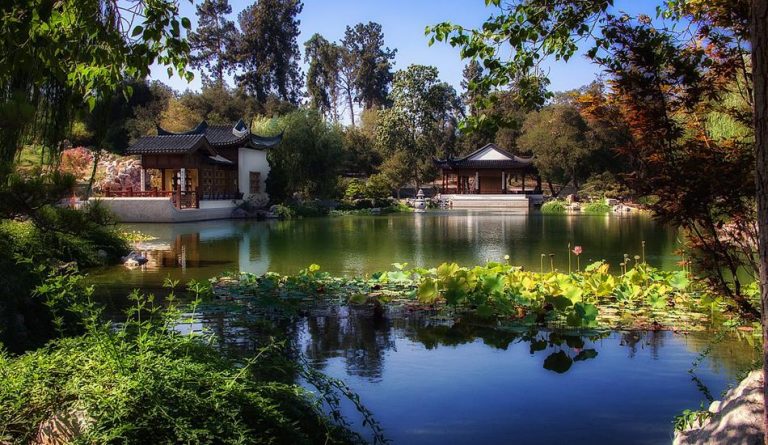 The philosophies of Confucianism, Taoism, and Buddhism had a great impact on how the Chinese arranged and decorated their gardens. (Image: Russ Allison Loar via wikimedia CC BY-SA 4.0)

In China, the philosophies of Confucianism, Taoism, and Buddhism have dominated imperial and public life for thousands of years. With a focus on a simplistic, moral life, these ideals have also had a great impact on how the Chinese arranged and decorated their gardens.

Taoism, by the ancient Chinese sage Laozi, puts nature at the center of existence. Claiming that “the Earth moves according to nature, the saint acts upon nature, and nature is Tao,” Laozi was of the opinion that nature is beautiful because it is free of intentions. The Tao does everything by “not acting.” Instead, it allows things to happen at their own pace, creating beauty in the process.

Eroded rocks are an important component of Taoism-inspired gardens. According to Taoism, rocks and water are considered opposites, rocks being yang and water yin. Rocks, though solid, are eroded by water over time. Many of the classical Chinese gardens used to feature eroded limestone rocks from Lake Tai, one of the biggest freshwater lakes in China.

In Confucianism, where man is given more prominence, people are viewed as being connected to nature. As such, the philosophy stresses a harmonious coexistence between man and his surroundings. “Taoism put man in nature, where Confucianism talks about man’s place in nature,” June Li, a garden curator, said to Los Angeles Times.

This idea of being connected with nature is almost a core feature of all classical Chinese gardens. Confucian philosophy argues for an ordered society founded on loyalty and filial piety. Its focus on creating order has also impacted Chinese gardens tremendously as seen by the intricate ways in which their various elements are arranged.

In China, one of the major branches of Buddhism is the Chan School. It developed during the 6th century A.D. and went on to influence Korea and Japan. Though Buddhist ideas did influence classical Chinese gardens, their greatest impact was in Japan where the famous Zen Gardens evolved.

A Japanese monk named Eisai, who lived between 1141 and 1215, imported Chan Buddhism into Japan, which later came to be known as Zen Buddhism. When Buddhist temples were being established across the country, small gardens were also built to provide the monks with a place where they could walk without disturbance and contemplate the Buddha’s teachings.

“In the Zen tradition, the gardens evolved toward a more earthly purpose: to remind practitioners that life can be elemental, simple. Some of the first Zen gardens were called ‘zazen-seki’, ‘meditation rocks’ because in their simplicity, their very reason for being was to radiate silence, calm and tranquility to anyone contemplating them,” according to Faena.

A special group of Buddhist monks is believed to have traveled all throughout Japan to set up such Zen Gardens. By the 15th century, some of the Zen Gardens started reflecting more abstract thought processes. Vegetation and water were absent from these gardens. A strong focus was placed on the grouping of rocks. Today, Zen Gardens are becoming popular across the world as people find such places to be extremely tranquil for a much-needed respite from the hustle and bustle of daily life.