History & Culture: The Oldest Working Opera House in the World 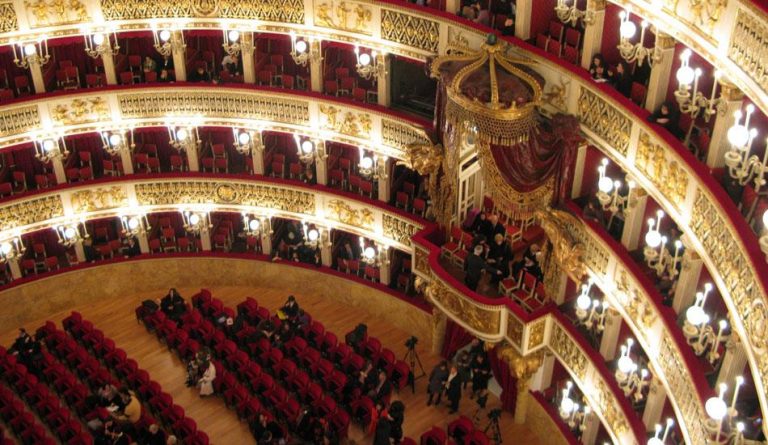 The Teatro di San Carlo holds the record for being the oldest continuous venue for opera in the world. (Image: via Wikimedia Commons)

In Naples, Italy, there is a theater that holds the record for being the oldest continuous opera house venue in the world. The “Teatro di San Carlo” was opened in 1737 and later became an inspiration for other theaters built across Europe.

“Teatro di San Carlo” was commissioned by Charles III and inaugurated in November 1737. Built at a cost of 75,000 ducats, the theater was designed to hold over 3,000 people. In 1816, a fire broke out in the building, destroying part of it. King Ferdinand IV ordered a full reconstruction of the theater, a task that was completed in 10 months.

During World War II, Teatro di San Carlo was once again damaged, this time by bombs. In 1943, Naples came under the occupation of Allied forces. A Lieutenant from the Allied Force Royal Artillery, Peter Francis, organized the repairs and the theater was once again brought back to life. When Teatro di San Carlo was officially reopened in November 1943, it brought much cheer to the locals. Almost 480,000 soldiers attended opera performances during the first year of its reopening. The opera house also brought the natives and allied forces closer.

“The San Carlo’s wartime activity played a central role in the Allied propaganda campaign and marked the occupation as very different from that of the recently departed Germans. In their strategy, the Naples theatre epitomised an occupation ‘of a very different kind’, one characterised not by round-ups and imprisonment, but by concerts, clubs and exhibitions — a forthright demonstration of Western countries’ democratic values,” according to IWM.

At the start of the 21st century, the Teatro di San Carlo was still standing. However, age had begun to take its toll on the historic building. The Italian government funded a $US74 million renovation of the opera house. And over a six-month period, the entire building was given a makeover. The rehearsal hall and décor were restored, new machinery was installed, and visitor facilities were upgraded. Today, the Teatro di San Carlo attracts world-class performers and continues to be an object of wonder for visitors.

“Grand, grand opera house, one of the oldest in the world. Hard to believe it was built in a few months in 1737. Its architecture is perfect with the foyer, balcony outstanding in enhancing the facade… the royal box is bijou. Sitting here for a concert is a dream come true,” says one tourist review on TripAdvisor.

Europe is home to several famous opera houses that have a long history. The La Scala in Milan, built in 1778, is often credited with having superb acoustics. The theater has a concave channel under the wooden floor of the orchestra that gives it the acoustical advantage.

In France, the Paris Opera is often regarded as an architectural marvel, thanks to its highly ornamented features. The Opera Royal in Versailles was built in 1769 and continues to hold gala performances. An ingenious feature of the opera house is that its walls, which look as if made from marbles, were actually made of wood. In Austria, the Wiener Staatsoper has been the center of Viennese musical life since its construction in 1869.

Outside of Europe, one of the most well-known theaters is the Sydney Opera House in Australia. Opened in 1973, it is regarded as a world heritage site by UNESCO and was also a finalist in the “New7Wonders of the World” campaign.