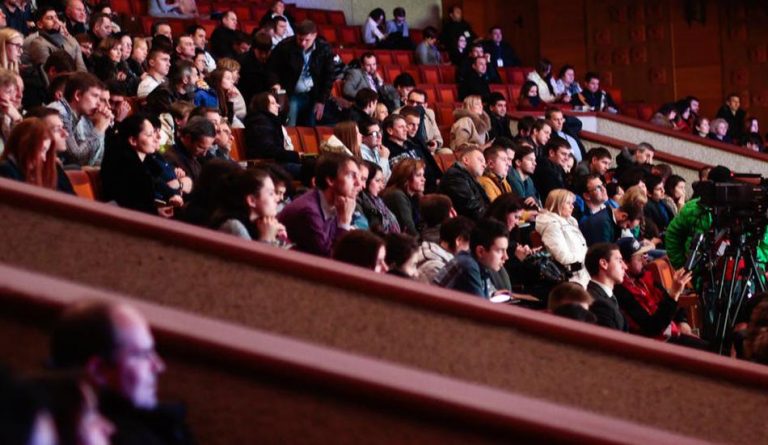 Watching live theater performances often engages people more than a TV show largely because everything happens live, right in front of their eyes. The audience usually feels so involved in the performance that every comic or tragic incident triggers deep emotions within them. Current research shows the heartbeats of audiences synchronizing with a theater performance.

The research, carried out by the UCL Division of Psychological and Language Sciences (PaLS), involved monitoring the heartbeats and electrodermal activity of 12 people watching live theater. An analysis of the data showed that the subjects’ hearts were responding in unison to the performance. Even when their pulse sped up or slowed down, it occurred at the same rate. Researchers realized that the experience of live theater performance was so overwhelming to the audience that they forgot group differences and developed a common psychological experience.

The synchronicity of physiological factors is not only seen in theater performances, but also in musical performances. One study looked at the brainwaves of people who listened to music as a group. The researchers hired a band to perform in front of 24 participants while measuring the audience’s brain waves and used motion capture to identify how people moved to the music. The team found that brain waves of the subjects synchronized, indicating that every individual was enjoying the music better as part of a collective group.

Some individuals were found to have higher rates of brainwave synchronicity than other members. “It turned out people who had more synchronized connections to other audience members enjoyed the concert more and they also felt more connected to the performers than the people who showed fewer audience connections,” Jessica Grahn, a Western Psychology professor in the Brain and Mind Institute who co-led the study, said to Medical Xpress.

Classrooms also seem to mimic what audiences watching a theater performance or live music experiences. In a study conducted in New York, researchers put a portable electroencephalogram (EEG) headset on 12 high school students and their teacher. They monitored the subjects for 11 classes and found that the more the students were engaged with their fellow classmates and teachers, the more their brainwave patterns synced with each other.

“The central hub seems to be attention… But whatever determines how attentive you are can stem from various sources, from personality to state of mind. So the picture that seems to emerge is that it’s not just that we pay attention to the world around us; it’s also what our social personalities are, and who we’re with,” Suzanne Dikker, a co-author on the study, said to Smithsonian.

Results of the study suggest that brainwave analysis can be used to determine whether the students are in a position to comprehend what is being taught to them. This can lead to the development of efficient teaching practices where students are assigned classes based on whether they are able to sync in well with their teachers.

Top theater performances in the US

Based on Harper Lee’s classic novel by Academy Award-winning screenwriter Aaron Sorkin, To Kill A Mockingbird (TKAM) plays on Broadway. An icon of Western literature, TKAM has touched on many lives with its open-hearted portrayal of the American South. “All rise. A transfixing act of theatrical storytelling that makes us hang on every word as if experiencing the story for the first time,” noted David Rooney from The Hollywood Reporter.

Stunning music with world-class choreography defines Disney’s The Lion King. One of the longest-running Broadway shows, The Lion King is a marvel for kids and adults alike as the epic journey of Simba is retold with breathtaking artistry. “Awe-inspiring! Broadway theater is alive again. [Julie] Taymor’s imaginative ideas seem limitless. it’s a gorgeous, gasp-inducing spectacle. Most important — against all odds — it has innocence. The show appeals to our primal, childlike excitement in the power of theater to make us see things afresh,” writes Richard Zoglin from Time Magazine.

For those interested in Chinese history, culture, and traditions, there isn’t a better place to be other than Shen Yun. Unveiling China’s magnificent 5,000-year-old divine culture, Shen Yun is the world’s premier Chinese dance and music company with shows throughout the world. “I have a granddaughter. I want her to see something like this because it’ll probably enrich her soul and her development as a person. It would change her life” says Roman Marcinkiewicz.