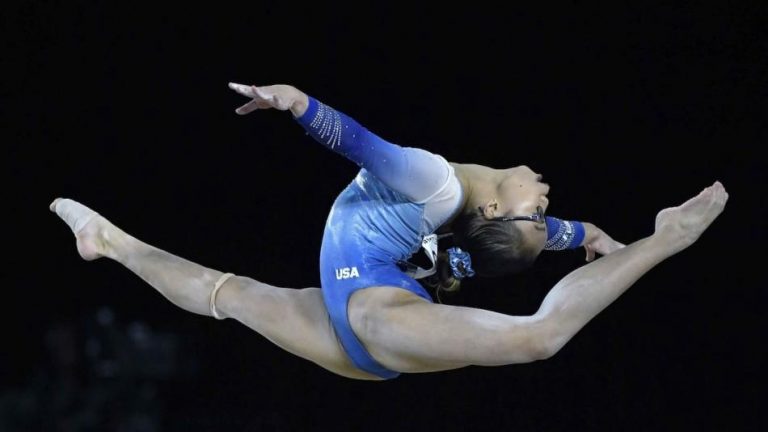 Despite the fact that gymnastics is a challenging individual sport that requires endurance and tenacity, Hurd was attracted to the varieties and difficulties of the gymnastics routines. (Image: ESPNW)

Morgan Hurd is a Chinese orphan girl who was abandoned by her biological parents after she was born. Hurd spent 11 months at an orphanage in Wuzhou City, Guangxi, China, before she was adopted by Sherri Hurd from Newark, Delaware, United States. Under Sherri’s love and nurturing, the former abandoned little girl has grown to be a world gymnastics champion. Her Chinese ethnicity, adopted background, and her accomplishments have given rise to her popularity among Chinese people around the world.

At age 3, Hurd was enrolled in gymnastics and at age 7, she joined a gymnastics team. Despite the fact that gymnastics is a challenging individual sport that requires endurance and tenacity, Hurd was attracted to the varieties and difficulties of the gymnastics routines. Through the years of setbacks and success, Morgan Hurd’s mother has supported her unconditionally. Since the early days of Hurd’s life, her mother has always been a source of encouragement, love, and respect. Hurd fondly told a story about her mother. One day, in a supermarket, someone asked her mother: “How much is the adopted girl?” Her mother responded without hesitation: “Priceless!”

After a slew of triumphs, Hurd set a new goal for herself: “The goal now is to represent the American gymnastics team to participate and win in the 2020 Olympic Games in Tokyo, Japan. This was an inconceivable goal in the past.” She is very proud of her new goal and believes that with more than 10 years of arduous training and a strong determination, she can overcome any obstacles.

In August 2019, in the National Gymnastics Championships held in Kansas City, Missouri, Hurd did very well in the first three individual events on the first day, but she fell in the fourth event — the freestyle gymnastics competition. As a result, her all-around score slipped to eighth place on the first day. In the end, she won fourth place in the individual all-around event, was the runner-up for uneven bars, and took fifth place for the balance beam. She said: “The overall score is not ideal, but I am still happy with what I’ve got considering the mistakes on the first day.” Despite the setback, Hurd is very confident that she will be able to make it to her first Olympics in 2020.

To prepare for the Olympics, Hurd now trains six days a week for 6.5 hours a day from Mondays to Fridays, and three hours on Saturdays. She said: “I come to the gym every day with a goal to practice and challenge my limits as much as possible.” Outside of training, Hurd is like a normal teenager. Every Sunday, she does yoga and hangs out with friends. She enjoys reading and her favorite book is Harry Potter. Reading helps her relax and immerse herself in a completely different world.

As Hurd’s performances improve in the world competitions, her coach Slava Glazounov spoke of her proudly: “She is very charming and very popular in Delaware and in the United States. More than 1,000 girls from Delaware, Maryland, Pennsylvania, and New Jersey train in the same gym every week and some are Chinese. Hurd’s success story has drawn many kids to train in the same gym and she has become an inspiration for many kids who dream to be as successful as her.”