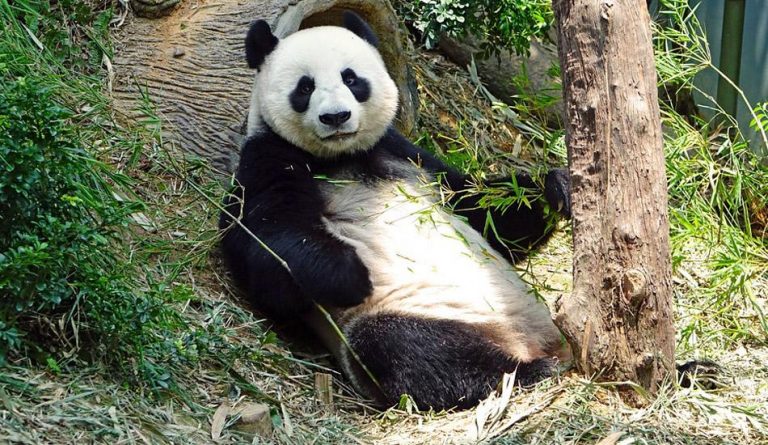 The cubs were born to Meng Meng (female) and Jiao Ching (male), two pandas that were loaned by China to Germany. After the first cub was born, the mother placed it on her belly and warmed the baby. The second cub was born within an hour. Since pandas usually only raise one of the cubs when twin pandas are born, authorities at the zoo are hiring experts to help Meng Meng raise the newborn pandas.

Under the agreement between China and Germany, any cubs born to Meng Meng have to be returned to China once they grow up and no longer need their mother. Since it will take a few years for the young twin pandas to mature, the baby pandas will remain at the Berlin Zoo for now. The newborns weighed 4.8 ounces and 6.5 ounces at birth. Their gender is not yet known.

After the twin pandas were born, readers of the newspaper Tagesspiegel suggested that they be named “Hong” and “Kong” as a sign of solidarity with the pro-democracy protesters of Hong Kong. “The political symbolism is there, and it’s clear that the government and also the leadership of the Berlin Zoo would not allow it… The last thing they would accept in Beijing, when the pandas are eventually brought back… are the names Hong and Kong,” Prof. Eberhard Sandschneider, who studies Chinese politics at the Free University in Berlin, said to The New York Times.

The pandas have been at the Berlin Zoo since 2017. The zoo management has reportedly been paying US$1 million per year to China for housing the pandas under the agreement. Pandas are notorious for their “lazy” mating behavior, which is one of the reasons why the species has been put on the endangered list. Less than 2,000 adult pandas exist in their natural habitat.

China is known to engage in “Panda Diplomacy” where Beijing gifts these creatures to other countries as a means to strengthen the relationship between both nations. However, China just loans the pandas. It does not give full ownership of the pandas to the receiving country. If Beijing believes that the nation to which it has loaned a panda has engaged in acts contrary to their interests, it will cancel the agreement and take back the creature.

In 2010, China repatriated a panda named “Tai Shan” from America’s National Zoo after President Barack Obama did something that angered Beijing. “Only a few days before Tai Shan was taken to China, the Chinese government had warned President Obama not to meet with the Dalai Lama on a diplomatic visit — and threatened that it would strain U.S.-China relations if he did. The meeting happened anyway,” according to Bidd.

In 2012, China signed a deal with Malaysia to loan a pair of Pandas starting in April 2014. However, Beijing withheld the transfer of Pandas when the time came as it was displeased with the Malaysian government’s handling of the missing MH 370 aircraft. Beijing eventually released the two pandas a month later. Last month, the pair gave birth to its second cub, “Yi Yi.”