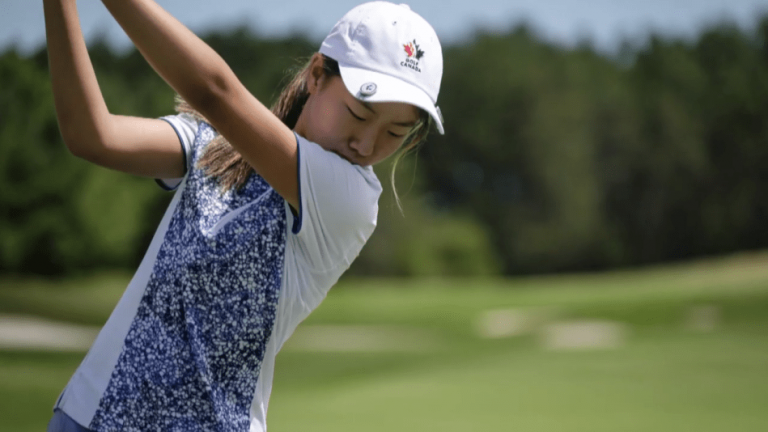 Michelle Liu, a 12-year-old Chinese girl from Vancouver, Canada, is the youngest player ever to participate in the Canadian Pacific (CP) Women's Open. (Image: Screenshot / YouTube)

This week, Michelle Liu, a 12-year-old Chinese girl from Vancouver, Canada, participated in the Canadian Pacific (CP) Women’s Open. She became the youngest player ever to participate.

Previously, Michelle won two championships in the Junior Golf World Championship. Twelve-year-old Liu said that this will be the first time she has participated in a professional competition. Liu, who started playing golf six years ago, said that in the beginning, she did not plan to become a professional player.

“I never thought that I could participate in top events so quickly,” said Michelle. According to her parents, Michelle’s talent for golf was discovered because her mother wanted to make it easy to pick Michelle up at the same time as her sister.

Ms. Xu, Liu’s mother, said that she and her husband do not play golf. “When I first sent my daughter to learn to play golf, it was because Michelle’s older sister was learning golf.” At that time, it was convenient for Ms. Xu to have both girls enrolled at the same summer camp.

Unexpectedly, Michelle showed her love for golf when she entered the class and learned to play. Ms. Xu then hired a professional coach to guide Michelle. Since then, Michelle has been practicing with coach Rob Houlding at the golf course in Richmond, Vancouver.

Coach Rob said that Michelle is a special child, she is very strong, and has more stability than her peers in dealing with her own emotions. He said: “Sometimes even if she encounters hardships, she can adjust herself quickly and overcome difficulties and complete the exercise.”

Michelle’s mother said: “Golf is a difficult sport. Michelle will play in the hot sun, ice, or hail storms. But, it’s these harsh external conditions that have tempered my child’s ability to cope with unexpected situations.”

In an interview with CBC reporters, Michelle mentioned the importance of cultural diversity in the golf event.

“In the game, I saw a lot of Asian players. As an Asian, I feel that to have more and more  players of different ethnic backgrounds participating in such top golf events is very important and meaningful.”

Coach Rob said that ethnic diversity is also one of the reasons for Michelle’s success. However, Rob revealed that in the next few years, Michelle’s golf training time will be decreased due to academic studies. Rob believes that Michelle has accumulated a lot of experience and can concentrate on her studies and at the same time maintain a high level of performance in golf.