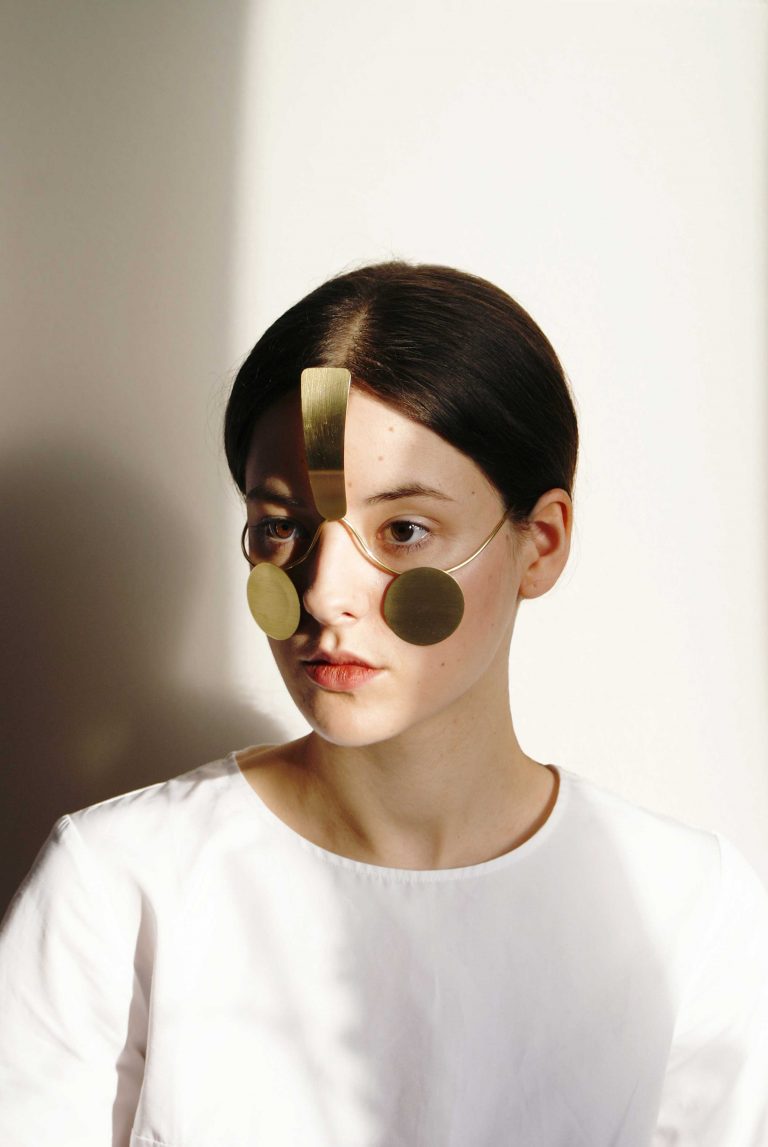 Ewa Nowak, a designer from Poland, has created facial jewelry that makes an individual unidentifiable to facial recognition systems. (Image: via NOMA studio)

Ewa Nowak, a designer from Poland, seems to have found a solution to the problem. Her product, Incognito, is a stylish metal mask that is capable of blocking facial recognition systems. It also doubles as attractive facial jewelry. The introduction of facial recognition technology in the public sphere has triggered several concerns, with many people arguing that its use infringes on the privacy of individuals.

“[Incognito] is worn on the face much like a pair of reading glasses. It places two round pieces of metal over the wearer’s cheeks with an elongated matching piece between the eyes, that reaches upwards toward the hairline. On the surface, Incognito appears to be a piece of contemporary brass jewelry akin to a tribal mask. However, the facial jewelry successfully covers elements of the face relied on by facial recognition algorithms,” according to The Mind Unleashed.

When Nowak graduated from college in 2017, she started investigating personal privacy and was surprised to find out that even when a person had their face partially covered, the facial recognition systems were capable of identifying them. After researching the subject, Nowak decided to create a product that would be able to protect personal privacy. Eventually, she ended up creating Incognito. Nowak’s face mask went on to win the Mazda Design Award at the prestigious Lodz design festival.

“I worked on the [face jewelry] for two or three months, and then it waited… The reason I showed in Lodz is because there was a competition. I entered, and the project won. It’s the easiest way to get displayed. There’s so many projects stuck at the university level. When we were studying, a lot of people asked how to show their work to people and share ideas. Education and business are disconnected from art,” she said to Fast Company.

Nowak is currently engaged in managing the affairs of her industrial design company NOMA. The company was recently asked to submit work for an exhibition in China. Not surprisingly, her face mask got rejected, with the authorities replying that they are unable to accept it for “political reasons.” In her spare time, Nowak is collaborating with her partner at NOMA to create a unique chair that can double up as gym equipment.

Privacy eyewear is a growing line of products that are also concerned with keeping a person safe from facial recognition cameras. A recently released product is the “Phantom,” created by Scott Urban. The glasses apparently reflect IR light. As a consequence, IR cameras will be unable to get a proper image of anyone donning the Phantom glasses.

“The days of when privacy was equated to criminals is long gone… Now it’s all going to be about corporations/governments using your face to know everything about you and gather all of your data into a neat little profile. I and many others would simply prefer to not be on their system,” Urban said to Mashable.

To a casual observer, Phantom glasses would appear just like any other normal eyewear. Customers can easily fit a prescription or tinted lens of their choice. The frames of the glasses have been designed specifically to overcome the 3D dot matrix face-mapping systems used by companies like Apple.