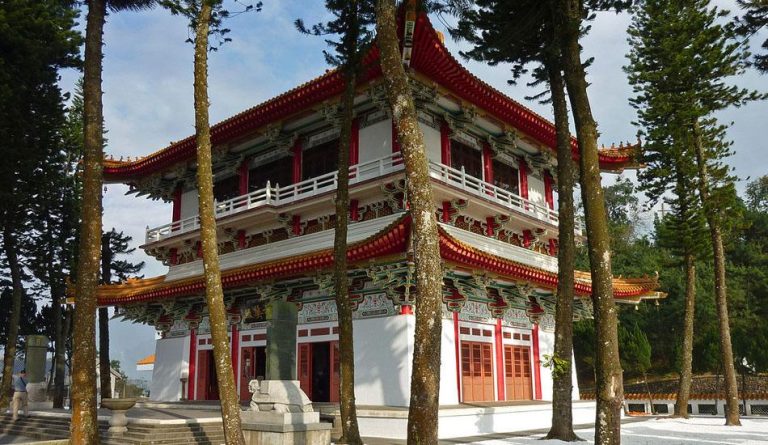 Xuanzang Temple, located in Nantou County, Taiwan, was established in 1965 to honor the Buddhist monk, Xuanzang who traveled to India to bring scriptures back to China. (Image: wikimedia)

Xuanzang Temple is a Buddhist temple located in Nantou County, Taiwan. It was established in 1965 by the local government to honor the famous monk Xuanzang, who is renowned for his 17-year journey to India during the 7th century.

Xuanzang Temple is located close to Sun Moon Lake, one of the most beautiful spots in Taiwan. “During World War II, the Japanese army brought the relics of Xuanzang from Nanjing to Japan. In 1955, the fourth abbot of Paochueh Temple Master Zongxin managed to bring his relics back to Taiwan and to keep them in Xuanguang Temple in Sun Moon Lake. The relics were later relocated to Xuanzang Temple upon its completion in 1965,” according to Round Taiwan Round.

Xuanzang Temple is structured after the ancient rooms and halls of the Tang Dynasty during which the monk lived. There are a total of three floors to the temple. The first is the main Xuanzang hall. Visitors are greeted by a statue depicting the monk on his way seeking the Buddhist texts. Xuanzang’s shrine is located on the second floor. A bone fragment of the monk can be seen in a small cauldron. On the third floor is “Xuanzang Pagoda.”

It houses the monk’s works and his “sarira,” a material found on cremating a Buddhist cultivator. In front of the main gate of the temple is a bell called the “wake-up bell.”

There are several ways to reach the temple. One of the easiest ways is to take the train to Taichung Railway Station and continue by Renyou Bus until you arrive at the Sun Moon Lake stop. When you reach the temple, you will have an excellent view of Sun Moon Lake. “No shoes and no photos allowed on the upper 2 floors. Free literature in the foyer. Adjacent museum details the life and travels of the Master… Great views across the lake to WenWu and Shuishe,” says a reviewer at Tripadvisor.

At the age of 13, Xuanzang was ordained as a novice monk at a Buddhist temple. When he was 20 years old, Xuanzang became a full monk. As an adult, he became very concerned with the incomplete nature of the Buddhist texts in China. He also felt that many of the texts were misinterpreted. From a desire to acquire true knowledge of the Buddhist scriptures, Xuanzang decided to travel to India.

During his 17-year journey, Xuanzang visited the Buddha’s home in Nepal and lived with some of the greatest Buddhist teachers of that time in the Indian city of Nalanda. He also engaged in philosophical discussions with other religious sects like the Hindus and Jains. He is believed to have won a great debate at the court of an Indian king in which thousands of wise men participated.

Returning back to China was a long and arduous process. “Xuanzang was still officially a fugitive in his homeland, China, because he had left without permission. Xuanzang wrote a letter to the emperor describing what he had learned and as a result, the emperor not only welcomed him back, but appointed him a court advisor,” according to Asia Society.

Xuanzang spent the remaining part of his life translating the Buddhist manuscripts he collected from China. As a result of his efforts, Buddhism spread throughout the country. Back in Nalanda, India, there’s a memorial hall dedicated to Xuanzang.