The Missing Donkeys of Kenya 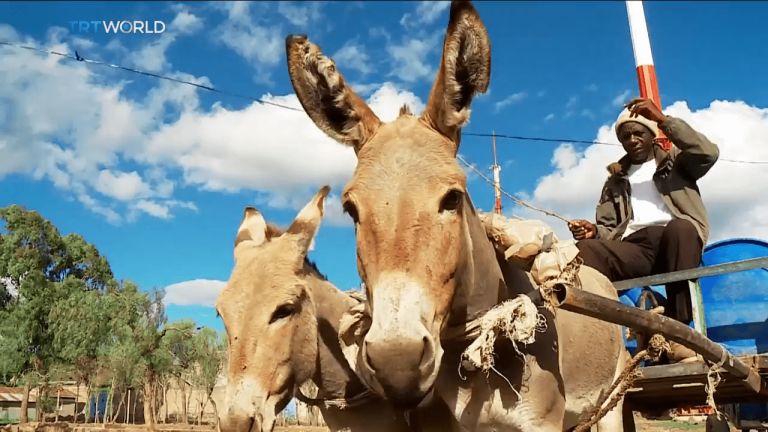 Kenya is facing a crisis due to the steep decline in the country’s donkey population. (Image: Screenshot / YouTube)

Ejiao is a traditional Chinese medicine made from donkey hides. The skyrocketing demand for the medicine in the country has resulted in an increase in donkey imports from Kenya. This has now resulted in a crisis due to the sudden steep decline in the animal population.

Ten years back, there were about 1.8 million donkeys in Kenya. In 2014, increased Chinese demand for the animals resulted in the opening of four new slaughterhouses in the African nation. As a consequence of increased exports to China, the donkey population of Kenya has now halved to about 900,000. This is a serious problem in a country where donkeys are used extensively in developing communities for everything from collecting water to taking kids to school.

Due to the increase in demand, trading donkeys has become very profitable. At the same time, the number of robberies has also gone up. “During the day, we used to leave our donkeys alone in the fields to roam and graze freely, but not anymore. The risk of them being stolen is too high,” Joseph Ng’ethe, a water vendor who relies on his donkey to make a living, said to China Dialogue.

Four years ago, a donkey would have fetched about US$58 to US$78 in Kenya. But now, you can get up to US$242 for the animal. The prospect of making an immediate short-term profit is what made most owners sell. Since demand for male donkeys was the highest, there has been a drastic reduction in their population, thereby creating a gender imbalance.

The shortage of male donkeys is now disrupting breeding activities. Combined with the fact that donkeys are slow to reproduce, with a gestation period of up to 14 months, not enough animals are being born to replace the dying ones. According to the Kenya Agricultural and Livestock Research Organization, there will be no donkeys left in Kenya by 2023 if the current rate of slaughter continues.

The increasing incidence of theft in donkeys has forced communities to set up vigilante groups. “After the slaughterhouse opened here in April 2016, the number of cases [of theft] shot up…  Supported by charities, donkey owners have formed groups to protect their animals. They do night patrols and form search parties when donkeys go missing. They even organised protests about the thefts,” Phillip Ariri, area chief of Naivasha, said to Reuters.

Ejiao has been in use in China for over 2,500 years. “[It] is a hard gel that can be dissolved in hot water or alcohol to be used in food or drink, or in beauty products such as face creams. Believed to improve blood circulation, ejiao is used as a blood tonic by people with anaemia, low blood cell counts or reproductive problems,” according to The Donkey Sanctuary.

The demand for ejiao requires almost 4 million donkey hides per year. This has brought down the donkey population in China from 11 million about two decades ago to less than 6 million today. It is this shortage that has made the country rely on other nations like Kenya to satisfy the ever-growing market demand.

The majority of ejiao production takes place in a remote province called Dong’e County. The biggest manufacturer of ejiao is Deej. The company registered sales of around US$874 million in 2016, twice the revenues it had earned four years back.