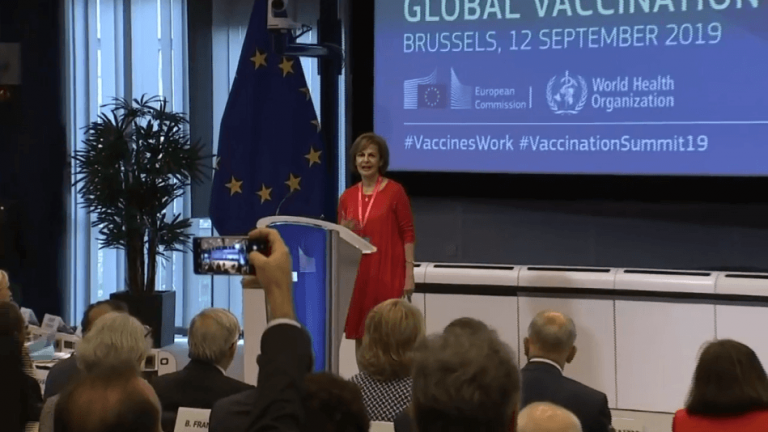 The European Commission and the World Health Organization recently held a Global Vaccination Summit in Belgium. About 400 scientists, political leaders, health professionals, and other global influencers attended the meeting.

The aim of the summit was to prevent the spread of diseases for which a vaccine is already available and to advocate against attempts to discredit vaccines. Seven countries have lost their “measles-free” status in the past three years. Surprisingly, four of them were EU member states. During the first half of 2019, almost 90,000 people in Europe were reported to be infected with measles. This is twice the number of infections in the first half of 2018 and more than three times the number from the first half of 2017.

“It is inexcusable that in a world as developed as ours, there are still children dying of diseases that should have been eradicated long ago. Worse, we have the solution in our hands but it is not being put to full use. Vaccination already prevents two to three million deaths a year and could prevent a further 1.5 million if global vaccination coverage improved,” Jean-Claude Juncker, President of the European Commission, said in a statement (Europa).

At the summit, it was agreed that all countries should have national immunization plans in place. Strong surveillance systems to monitor the spread of vaccine-preventable diseases should also be implemented. Programs to boost public confidence in vaccination were deemed necessary to root out increasing resistance towards the procedure. Vaccine shortage was highlighted as a major risk. To counter it, countries are advised to make procurement channels more efficient.

WHO and the European Commission asked for strong support to the Global Vaccine Alliance (GAVI), an organization that aims to bring private and public sectors together with the aim of ensuring that children from poorer nations have access to the latest vaccines. The importance of making immunization a universal right was also discussed at the summit.

Crisis of confidence in vaccination

The Vaccine Confidence Project at the London School of Hygiene and Tropical Medicine conducted a global survey that showed a crisis in confidence about vaccination in Europe. While 79 percent of the global respondents agreed that vaccines are safe, only 59 percent of Western Europeans and 50 percent of Eastern Europeans agreed to such a conclusion. Ninety-five percent of people in South Asia and 92 percent from East Africa saw vaccines as safe.

Only 77 percent of Western European respondents believed that vaccines were effective. In comparison, a whopping 94 percent of South Asians agreed to the statement. “In developing countries, where deadly diseases like diphtheria, measles or whooping cough are more common, I’ve seen mothers queue for hours to make sure their child is vaccinated… It is in wealthier countries, where we no longer see the terrible impact these preventable diseases can have, that people are more reticent. This reticence is a luxury we can ill afford,” Seth Berkley, the chief executive of GAVI, the Vaccine Alliance, said to The Guardian.

Why is there a fall in confidence regarding vaccines? Is it because of new research that suggests that certain vaccines have contributed to the proliferation of certain illnesses? Or is it because scientists who voice an opinion against the majority get immediately discredited, disbarred, and are not given a chance to investigate further? Why have people lost confidence in the pharma industry? This did not happen overnight.