Predictions for the European Economy: Gloomy Days Ahead 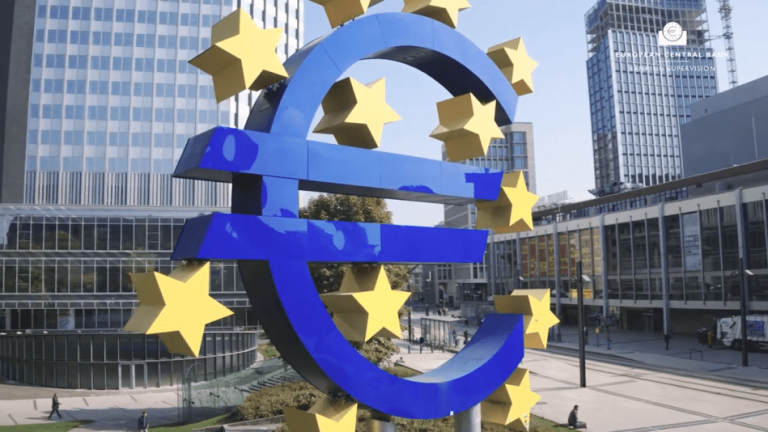 As a major European power, Germany’s decisions regarding its cooperation with Huawei and the Chinese government could have profound implications for the continent. (Image: Screenshot / YouTube)

The European Central Bank (ECB) has lowered the interest rates for bank deposits by 10 basis points to minus 0.5 percent. The ECB is hoping that the measure will encourage banks to lend out more, thereby stimulating the economy.

In a negative interest rate policy, the banks in the region will have to pay interest on the extra reserves that they deposit with the central bank. This is basically the central bank’s way of penalizing commercial banks for not lending the money they have on hand. Negative interest rates were first introduced in June 2014 when the ECB set the deposit rate at minus 0.1 percent.

This extra expense hurts the profitability of the banks. “Any attempt by banks to pass negative interest rates on to consumers is bound to be unpopular. If they cannot do this, however, lower rates merely put them in an even tighter squeeze. With confidence in Europe’s banking sector so low, this means that the ECB has an extreme technical challenge. It has somehow to stimulate the broader economy without denting lenders,” according to Bloomberg.

On the plus side, negative central bank rates force banks to offer cheaper loans to customers. This is what the ECB is calculating its policy will achieve. Negative rates also tend to weaken a country’s currency, which can give it a competitive export advantage. Plus, they boost inflation by increasing import costs. The eurozone’s inflation is currently at a low 1 percent. If inflation were to go any lower, the economy of the region would sink into further trouble.

“In harsh economic times, people and businesses tend to hold on to their cash while they wait for the economy to improve. But this behavior can weaken the economy further, as a lack of spending causes further job losses, lowers profits, and reinforces people’s fears, giving them even more incentive to hoard. This is precisely the deflationary spiral that European policymakers are trying to avoid with negative interest rates,” according to Investopedia.

The ECB stated that it is looking to keep key interest rates at current or lower levels until inflation rises close to 2 percent. The bank announced plans to start buying eurozone government bonds from November. About US$22 billion worth of bonds will be bought by the ECB every month for “as long as necessary.” This is expected to drive down yields, which will cut down the borrowing cost for companies.

A couple of years back, the European economy was growing at a healthy pace. However, the Brexit situation has completely turned the tables. EU leaders initially assumed that they could make the UK accept a hard bargain. If Britain were to walk out, it was believed that the EU region was economically strong enough to face the consequences.

But it seems that those calculations are proving to be wrong. “Now, there is an increasing concern that the eurozone is really weakening significantly, and that a hard Brexit could be the thing that would send it into recession,” Angel Talavera, senior eurozone economist at Oxford Economics, said to The New York Times.

Germany, the biggest economy in the EU, is already on the brink of a recession. A survey of about 10,000 companies in the country indicates that business owners are low in confidence as to the future of the economy. The industrial sector has been hit hard due to falling exports. If Germany were to plunge into recession, it would trigger an economic chain reaction that would not just affect Europe but the entire world.