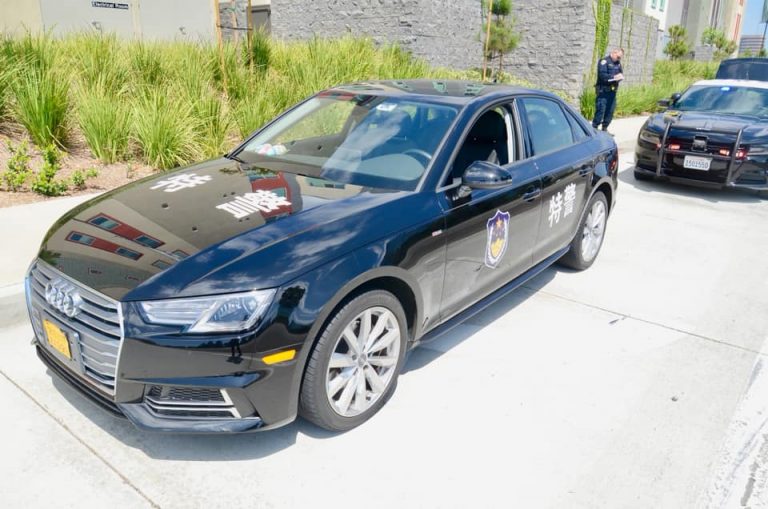 Residents in Irvine, California, said they have seen vehicles on the local streets looking exactly like the police cars in China. (Image: California Highway Patrol)

Residents in Irvine, California, said they have seen vehicles on the local streets looking exactly like the police cars in China. The vehicles are marked with the Chinese characters for Police, Public Security, and SWAT. This has caused confusion and panic within the Chinese community.

In a statement, the Irvine Police Department said this behavior is a violation of the law, regardless of the language written on the vehicle. Police stressed that these fake police vehicles can cause problems that outweigh any intentions of having a joke.

Although law enforcement agencies have publicly denounced this kind of behavior, some still ignore the law and continue to drive fake police vehicles on the roads. The California Highway Patrol in Santa Ana announced two days ago that authorities received several complaints about an Asian man driving a car marked with Chinese characters for SWAT. Police officially arrested the driver after a thorough investigation.

According to the police, the detained black Audi was marked with the Chinese characters SWAT and the emblem of the Chinese police. The license plate in front of the car was made up of Chinese characters that said “Emergency Police A999.” The driver will be charged with impersonating a law enforcement officer, as well as forging, and being in possession of a fraudulent government emblem.

They also advised the public that no foreign official, including Chinese officials, has any power to enforce the law in the United States. And any document, emblem, setting, or design that represents a foreign government agency does not represent anything in the United States and has no enforcement power.

People living in the Australian cities of Adelaide, Melbourne, and Perth have also seen fake Chinese police vehicles, and officers have conducted similar investigations. The Australian Green Party considers this behavior a threat to the Chinese community, and has demanded legislation to ban cars with fake foreign police symbols in Australia.

The South Australian police told the Australian Broadcasting Corporation that they had been informed of the incident and were investigating to find out if the vehicle involved was illegal. A police spokesperson said: “The police have talked to the owner of the vehicle. He said he bought the sticker on the Internet and taped it on the car as a joke. He took the sticker off after talking to the police.”

The police said that although having the sticker on the BMW does not constitute a crime, it is illegal to pretend to be a law enforcement officer in Australia. Pretending to be a police officer in South Australia may result in six months in prison or a fine of A$2,500.