A Week-Long Climate Strike Is Here, Courtesy of ‘Fridays for Future’ 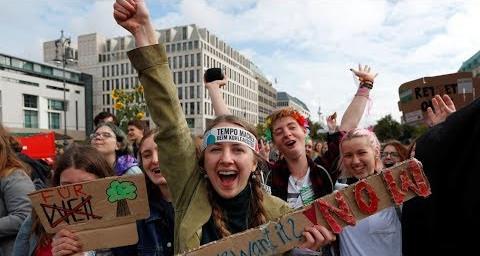 Millions of youth activists participated in climate strikes organized by Fridays for Future at multiple locations across the world. (Image: Screenshot / YouTube)

Fridays for Future, a movement founded by Swedish teen climate activist Greta Thunberg, held a week-long strike between September 20 and 27, 2019. Millions of youth activists participated in strikes that were held at multiple locations across the world.

In March this year, large-scale demonstrations against climate change were held with the participation of 1.6 million students. This time, the numbers are expected to be even greater. Campaigners are said to have already arranged 3,459 climate protests in around 120 countries.

“The good news is the fossil industry is beginning to lose the fight. We need to replace them now to keep temperature below 1.5 degrees…  September 20th to 27th will be the biggest climate mobilization we have ever seen. The world is going to demonstrate that it is ready for a change,” Bill McKibben, co-founder of environmental group 350.org, said to Common Dreams.

Greta Thunberg, who has been leading the climate strikes since last year, visited the U.S. recently where she addressed Congress prior to a hearing on climate change. The 16-year-old asked lawmakers to listen to science and take immediate steps to curb global warming. A few days back, Thunberg met ex-President Barack Obama. She spoke at the United Nations Climate Action Summit in New York on September 23. Amnesty International recently awarded Greta with the Ambassador of Conscience Award for 2019.

As to the momentum of Fridays for Future, some of the teenagers who enthusiastically joined the movement initially have apparently left, no longer able to sustain their interest in the cause. However, the movement has been successful in attracting new members on a consistent basis.

“It’s difficult to ask youth who have never taken part in any form of civil disobedience to stand up and fight against world governments they’ve seen as allies…  But with the knowledge and information so easy to obtain, more and more youth are standing up and taking part in the youth climate movement, and we are becoming more and more connected,” Mia Beijer, who co-founded Future Rising Ottawa, said to DW.

Though the climate strikes have been successful in gaining a wide support base, the movement has also been criticized heavily by experts. The latest to lash out at climate alarmists is Petteri Taalas, the secretary-general of the World Meteorological Organization (WMO). In an interview with a  Finnish magazine, Taalas had some harsh words for climate doomsters and argued for a more rational approach to the issue of climate change.

“It is not going to be the end of the world. The world is just becoming more challenging. In parts of the globe, living conditions are becoming worse, but people have survived in harsh conditions… While climate skepticism has become less of an issue, now we are being challenged from the other side. Climate experts have been attacked by these people and they claim that we should be much more radical. They are doomsters and extremists; they make threats,” he said in the interview (The Epoch Times).

Peter Moore, the co-founder of Greenpeace, termed Taalas’ comments the biggest hole in the climate alarmist’s narrative. He stated that real scientists and meteorologists are probably fed up with the catastrophic outlook presented by people like Greta Thunberg.