Chinese Hot Pot: Yummy, Exquisite, and Taking Over the US 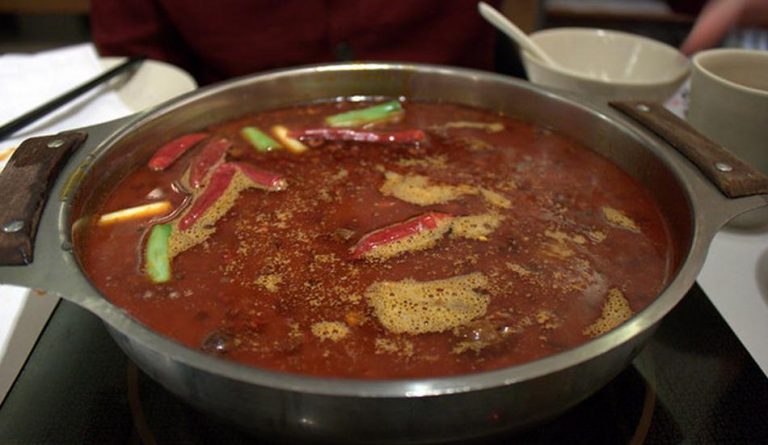 To add spicy flavor to the hot pot broth, add in some chilies. (Image: Krista via flickr CC BY 2.0 )

Hot pot is one of the most popular food preparations in China. According to a report, Chinese people spent close to 3.5 Trillion Yuan in 2016 dining out on hot pot. People basically sit around a table that has a simmering pot of broth at the center. Various raw items, both meat and vegetables, are placed around the table. People take the raw food of their liking, put it in the broth, cook the food, pull it out, and eat it directly or along with some dipping sauces. Hot pot has basically three components — broth, raw foods, and the sauces.

Traditionally, two kinds of broth are served — a spicy one and a mild one. To prepare the broth, put 250 grams of pork bones, 1000 grams of chicken, some ginger, scallions, and white peppercorns into a bowl. Add 4 liters of water and bring everything to a boil. Turn down the heat and let it simmer for about an hour. The basic broth will now be ready. You can change the flavor of the broth into a mild one by further cooking it with some corn, salt, mushrooms, garlic cloves, ginger, and red dates. To bring a spicy flavor, you can add mashed chilies, soy sauce, star anise, and Doubanjiang (a salty paste made of soybeans, rice, broad beans, and spices).

Raw foods to be served at the table

On the table, fire up a burner and place the hot pot broth over it so that it keeps simmering. Set up your preferred raw foods on different plates. The people around the table can take whichever foods they like and boil them in the broth. Usually, separate tongs are used for different food items.

As far as dipping sauces are concerned, you are completely free to use whatever tickles your fancy. Traditionally, a dipping sauce made from mixing soy, chili oil, and sesame oil is served. Egg yolks are also used as a dipping sauce.

Over the past few decades, hot pot has become a favorite food in the U.S. as Chinese dishes become more commonplace. In fact, Xiaolongkan, one of the largest hotpot chains in China, is planning to open its first outlet in the United States in 2020 due to the huge demand for the dish.